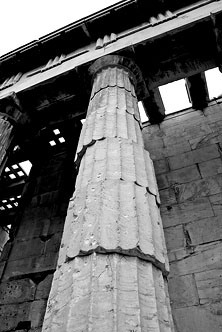 Simon Johnson is following the economic crisis that’s mounting daily in Greece — and in Spain, Portugal, Ireland, and Italy — and is deeply pessimistic:

The IMF cannot help in any meaningful way.  And the stronger EU countries are not willing to help — in part because they want to be tough, but also because they do not have effective mechanisms for providing assistance-with-strings.  Unconditional bailouts are simple — just send a check.  Structuring a rescue package that will garner support among the German electorate — whose current and future taxes will be on the line — is considerably more complicated.

The financial markets know all this and last week sharpened their swords.  As we move into this week, expect more selling pressure across a wide range of European assets.

As this pressure mounts, we’ll see cracks appear also in the private sector.  Significant banks and large hedge funds have been selling insurance against default by European sovereigns.  As countries lose creditworthiness — and, under sufficient pressure, very few government credit ratings will hold up — these financial institutions will need to come up with cash to post increasing amounts of collateral against their derivative obligations (yes, the same credit default swaps that triggered the collapse last time).

I can’t pretend to have any kind of deep knowledge about this. But ever since the 2008 bank bailout I’ve had a persistent buzz in my head telling me that another shoe is likely to drop somewhere. I thought it might be Eastern Europe, channeled through Austria, or maybe something in Asia. The Dubai default seemed like a canary in the coal mine. Or even some kind of shock in the U.S. related to ARM resets. But now it looks like it might be Greece.

Hopefully Johnson is just being overly pessimistic. But one of the key lessons of the 2008 crash was how fast things can go south when markets lose confidence. If Greece fails, it won’t just slowly slide into default, it will get pushed there by opportunistic investors who suddenly decide to place huge bets on its failure, aided by panicked investors who see what’s happening and all try to head for the exits at once. If and when that happens, Europe or the IMF or the United States will have only a few days to act to prevent it from becoming a continent-wide rout.

On the other hand, Greece’s sale of treasury bonds last week went pretty well. So maybe things aren’t as bad as we think. That’s what I keep telling myself, anyway.

UPDATE: More here: “The EU’s refusal to offer Greece anything beyond stern words and a one-month deadline for harsher austerity — while admirable in one sense — is to misjudge how fast confidence is ebbing. Greece’s drama has already metastasised into a wider systemic crisis. The world risks a replay of the Lehman collapse if this runs unchecked, this time involving sovereign dominoes.”