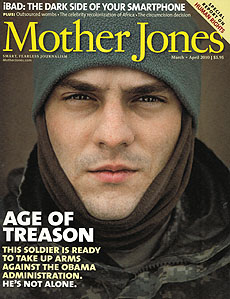 about paranoid right wingers with guns and uniforms? Meet the Oath Keepers, the hottest new patriot group in the country. Justine Sharrock spent months getting to know them:

Founded last April by Yale-educated lawyer and ex-Ron Paul aide Stewart Rhodes, the group has established itself as a hub in the sprawling anti-Obama movement that includes Tea Partiers, Birthers, and 912ers. Glenn Beck, Lou Dobbs, and Pat Buchanan have all sung its praises, and in December, a grassroots summit it helped organize drew such prominent guests as representatives Phil Gingrey and Paul Broun, both Georgia Republicans.

There are scores of patriot groups, but what makes Oath Keepers unique is that its core membership consists of men and women in uniform, including soldiers, police, and veterans. At regular ceremonies in every state, members reaffirm their official oaths of service, pledging to protect the Constitution — but then they go a step further, vowing to disobey “unconstitutional” orders from what they view as an increasingly tyrannical government.

….On a clear September evening, I found myself in suite 610 at the Texas Station casino in North Las Vegas mingling with two dozen Oath Keepers state leaders, directors, and hardcore devotees….Oath Keepers is officially nonpartisan, in part to make it easier for active-duty soldiers to participate, but its rightward bent is undeniable, and liberals are viewed with suspicion. At lunch, when I questioned my tablemates about the Obama-Hitler comparisons I’d heard at the conference, I got a step-by-step tutorial on how the president’s socialized medicine agenda would beget a Nazi-style regime.

I learned that bringing guns to Tea Party protests was a reminder of our constitutional rights, was introduced to the notion that the founding fathers modeled their governing documents on the Bible, and debated whether being Muslim meant an inability to believe in and abide by — and thus be protected by — the Constitution. I was schooled on the treachery of the Federal Reserve and why America needs a gold standard, and at dinner one night, Nighta Davis, national organizer for the National 912 Project, explained how abortion-rights advocates are part of a eugenics program targeting Christians. I also met Lt. Commander Guy Cunningham, a retired Navy officer and Oath Keeper who in 1994 took it upon himself to survey personnel at the 29 Palms Marine Corps base about their willingness to accept domestic missions and serve with foreign troops. A quarter of the Marines he polled said that they would be willing to fire on Americans who refused to disarm in the face of a federal order — a finding routinely cited by militia and patriot groups worried about excessive government powers.

Are these guys for real, or are they all hat and no cattle? I’m still not sure. But you should read the story and decide for yourself.