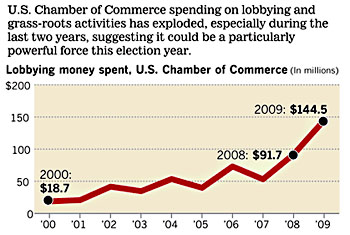 After the Citizens United decision opened the floodgates for corporate spending in political campaigns, supporters of the decision offered up several pushbacks against the doomsayers. One of them was simple: most big corporations don’t really want their customers to view them as explicitly political, and this will rein in the amount of money they’re willing to spend financing campaigns.

The U.S. Chamber of Commerce is building a large-scale grass-roots political operation that has begun to rival those of the major political parties, funded by record-setting amounts of money raised from corporations and wealthy individuals.

….What makes the initiative possible is a swelling tide of money. The chamber spent more than $144 million on lobbying and grass-roots organizing last year, a 60% increase over 2008, and well beyond the spending of individual labor unions or the Democratic or Republican national committees. The chamber is expected to substantially exceed that spending level in 2010.

….The recent Supreme Court ruling that corporations have a free-speech right to spend money to help elect or defeat candidates not only struck down a century of laws limiting such spending, but it also made many business executives feel more comfortable about using corporate money for political purposes.

I think this is a good insight. Obviously a group like the Chamber of Commerce is likely to raise more money when Democrats are in power and corporations are afraid of increased regulation. But corporate contributions depend on a lot of things, and one of them is just historical norms and traditions. Combine a Democratic administration with a ruling like Citizens United, and suddenly a lot of corporate executives are both more motivated to give and more comfortable with the idea of large-scale corporate influence on political campaigns. It’s impossible to say how big a factor this is, but it’s certainly floating around in the background somewhere.

In any case, this is just a toe in the water. Once big corporations get more comfortable with increased spending on groups like the Chamber, they’ll start to get more comfortable with direct spending too. We may or may not see a lot of direct contributions to political campaigns this year, but it’s probably just a matter of time. This is just a start.