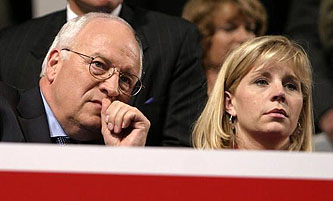 I haven’t gotten around to blogging about this yet, but as you probably know by now Bill Kristol and Liz Cheney have recently been beating the drum about a group of Justice Department lawyers who had previously defended accused terrorists:

Senate Republicans have demanded details of the lawyers’ past work and Liz Cheney’s group “Keep America Safe” has questioned their “values.” A drumbeat of Republican criticism forced the Justice Department reluctantly to identify seven of them last week. But the harshness of the criticism — Keep America Safe labeled a group of them the “Al Qaeda Seven” — has provoked a backlash from across the legal establishment.

Cheney probably thought this was just another soft target for her endless crusade to convince America that Democrats will get us all killed. But guess what? Big time lawyers don’t much like being attacked, they tend to stick together on stuff like this even across ideological lines, and they have lots of money and power that allow them to fight back. Methinks Liz bit off more than she expected. Plus there’s this speculation from a lawyer friend of mine:

Some of these [attorneys] are bigwigs at big law firms. Their egos will want their pound of flesh. It will be interesting to see what steps they take. Cheney’s shop is not a government entity and not entitled to immunity (the shield that keeps a lot of defamation lawsuits at bay). The people who were attacked — while high profile in their respective professions — may not rise to the sufficiently high level of public figure, where you need evidence of malice directed at the individuals specifically.

Im sure Cheney and Kristol looked at this from all angles, so there may be an ace in the hole somewhere that I’m missing (I advise on defamation in general terms, but I’m not a litigator).

I’m sure we won’t be seeing anything soon. If anything does get filed (other than a TRO — which is probably worthless since the ad has been taken down), it won’t be for a while. My guess is that they’ll wait until they have some measurable damages. And these are probably already mounting.

Having seen things like this pop up before when I was at a big firm, they will likely have to send out firmwide correspondence to all clients advising them of this matter. Most firms would heed the advice of PR people to get in front of this before aggressive conservative-oriented law firms start trying to use it to pry big name clients away. And if that happens, hoo-boy.

Internally, they will need to reassure associates and junior partners that their careers have not been tainted and please don’t abandon ship.  They may even need to beef up personal security for their families. All of this would be reasonably foreseeable damages and particularly hard to avoid. Of course, there may be incentives not to bring suit — mostly political, or institutional (firms don’t like to get in the habit of suing people in their own names) — but when you’re dealing with big-wig egos, there is an unsurprising lack of restraint when they have been personally crossed.

My uninformed guess is that a defamation suit is unlikely. Big law firms probably prefer to generally keep a low profile even when the provocation is considerable. And the legal end of this is pretty uncertain, since it’s right at the intersection of public/private considerations and libel/privacy law. Still, you never know. All it takes is one firm to get pissed off enough. And it would be interesting to see a bunch of high-priced litigators arguing this out in open court, wouldn’t it?