Via Matt Yglesias, Robert Wright takes a look at whether drone strikes aimed at killing terrorist leaders are effective. A tentative answer comes from Jenna Jordan of the University of Chicago, who examined the results of 298 attempts between 1945 and 2004 to weaken terrorist groups through “leadership decapitation”:

Her work suggests that decapitation doesn’t lower the life expectancy of the decapitated groups — and, if anything, may have the opposite effect.

Particularly ominous are Jordan’s findings about groups that, like Al Qaeda and the Taliban, are religious. The chances that a religious terrorist group will collapse in the wake of a decapitation strategy are 17 percent. Of course, 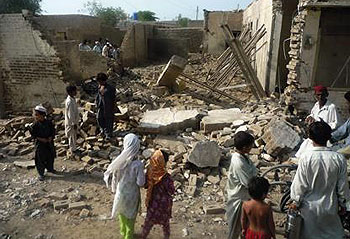 that’s better than zero, but it turns out that the chances of such a group fading away when there’s no decapitation are 33 percent. In other words, killing leaders of a religious terrorist group seems to increase the group’s chances of survival from 67 percent to 83 percent.

Of course the usual caveat applies: It’s hard to disentangle cause and effect. Maybe it’s the more formidable terrorist groups that invite decapitation in the first place — and, needless to say, formidable groups are good at survival. Still, the other interpretation of Jordan’s findings — that decapitation just doesn’t work, and in some cases is counterproductive — does make sense when you think about it.

Italics mine. Jordan’s sample size for religious groups is 35 — which isn’t too bad — and if you combine both the ones that were targeted for decapitation and those that weren’t, a grand total of eight collapsed. This suggests that religious terrorist groups are just pretty hardy organizations regardless of how you fight them. In fact, that really seems to be one of her main findings: only 22% of religious terrorist groups collapsed, compared to 70% for all the other kinds of terrorist groups. So al-Qaeda is going to be a pretty tough nut no matter how we go about fighting them.

The result that consistently stood out from this research was the propensity of decapitation strikes to cause religious organizations to become substantially more deadly. There are several possible reasons to explain this outcome. Many religious organizations are robust, such as Hezbollah and Hamas, which is an important criterion for surviving the loss of a leader as well as having the resources to strike back….The indication that killing religious organization’s leaders rather than arresting them is more likely to lead to a surge of deadly violence may be worth further exploration.

So then: killing the leaders of a religious terrorist group doesn’t cause them to collapse but it does cause them to embark on even more deadly attacks. What’s more, the collateral damage on civilian populations is, as Defense Secretary Robert Gates put it yesterday, “one of the greatest risks to the success of our strategy.” That’s worth further exploration, all right.