So how did Texas escape the housing bubble? I blogged about this a couple of days ago, and I was skeptical that it could really be explained by the mortgage regulations that Texas had in place during the bubble years. Ryan Avent is skeptical too, but he suggests that I’m asking the wrong question in the first place. There’s really no mystery about Texas, he says: most cities outside coastal areas didn’t see huge price appreciation, so Dallas and Houston aren’t really outliers. They escaped the bubble because land there is cheap and plentiful. The real question is why there are a couple of 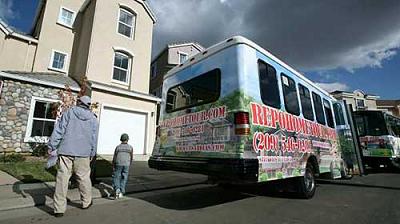 non-coastal cities like Phoenix and Las Vegas, where land is also cheap and plentiful, that did participate in the boom. His explanation:

As it turns out, you can “catch” a bubble from elsewhere. Migration to Las Vegas and Phoenix came overwhelmingly from Southern California. Residents of Los Angeles would cash out their homes and move east, buying one or two properties in cheaper markets, investing in those properties, and generally transmitting the bubble mentality that characterised the real estate markets of the California coast. Analysis of price movements has identified ripple effects from the Los Angeles property market to the Las Vegas property market, and thence on to the Phoenix property market. It seems likely that a similar phenomenon took place in Florida, which absorbed a great deal of migration from bubbly northeastern markets.

The academic backup for this is here. I suppose it makes sense, though I’m not thrilled with the reliance on a “bubble mentality” as the proximate cause. There’s no question, I think, that people are far more likely to migrate from Southern California to Phoenix (or Las Vegas) than they are to Dallas, but what about, say, Denver or Salt Lake City? Perhaps it’s more accurate to call this a general Mountain West phenomenon rather than just a Phoenix/Las Vegas phenomenon, and since Texas isn’t part of the Mountain West it got left out.

Still, “bubble mentality” might be as good an explanation as any. Some years ago Paul Krugman explained the dynamics of the housing bubble by comparing Flatland — the middle of the country where you just build outward when demand rises — to the Zoned Zone, the coastal areas where land is at a premium and prices skyrocket when demand goes up. But there’s always been a problem with that. Here in California, prices in built-up locations like Los Angeles, Orange County and San Francisco did indeed skyrocket, but if anything, the prices out in areas like Riverside and Stockton may have appreciated even more. That’s crazy, since Riverside has plenty of room to expand. But if the bubble mentality is sort of like a virus, as Ryan suggests, then that’s that. Even with plenty of land, prices went up because everyone thought prices would go up. In Dallas, not so much. Additionally, as Krugman pointed out earlier this year, even though they have plenty of land, areas like Phoenix and Las Vegas (and Riverside and Stockton) have more building restrictions than most places in Texas.

There are still some questions here. But to my ears, anyway, treating Phoenix and Las Vegas as the outliers actually makes a little more sense than treating Dallas as the outlier. So that’s where we are for now.