A few days ago Ezra Klein interviewed lefty economist James Galbraith (John Kenneth’s son) and asked him whether the long-term growth of the federal deficit was a problem. He said no:

JG: What is the nature of the danger? The only possible answer is that this larger deficit would cause a rise in the interest rate. Well, if the markets thought that was a serious risk, the rate on 20-year treasury bonds 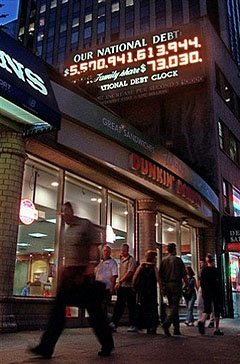 wouldn’t be 4 percent and change now. If the markets thought that the interest rate would be forced up by funding difficulties 10 year from now, it would show up in the 20-year rate. That rate has actually been coming down in the wake of the European crisis.

This is a common argument, but I’ve never been much impressed by it. After all, for about a decade “the markets” thought that housing prices would rise forever and subprime CDOs were a great investment. Then they changed their minds practically overnight starting in 2007 and touched off a global financial panic. Those same markets may now think that U.S. interest rates are going to stay low forever, but they can change their minds about that just as quickly if they suddenly decide to get scared about the size of our deficit. That may or may not happen, but the fact that we’re witnessing a flight to safety in the middle of a global slump isn’t very good evidence that it never will.

EK: But putting inflation aside, the gap between spending and revenues won’t have other ill effects?

JG: Is there any terrible consequence because we haven’t prefunded the defense budget? No. There’s only one budget and one borrowing authority and all that matters is what that authority pays. Say I’m the federal government and I wish to pay you, Ezra Klein, a billion dollars to build an aircraft carrier. I put money in your bank account for that. Did the Federal Reserve look into that? Did the IRS sign off on it? Government does not need money to spend just as a bowling alley does not run out of points.

This strikes me as wrong. I don’t know when Galbraith Sr. made that (typically witty) comment, but I imagine it was in the 50s or 60s, when inflation was restrained, the deficit was low and federal debt was shrinking, global capital flows were more regulated, and government bonds were mostly sold domestically. But that’s no longer the case. Domestic banks have lots of things they can do with their money besides stashing it in treasurys, and they do. What’s more, treasury bonds these days are held in large part by overseas investors and central banks, and they could lose their appetite for funding both our federal deficit and our current account deficit any time. There’s no simple law that says there has to be a market for as much debt as the United States cares to run up.

Countries usually get into trouble when their debt levels get too high. It generally leads to default, high interest rates, high inflation rates, a currency crash, or a combination of all four. Now, the United States has the singular advantage of having its external debt denominated in dollars, but that doesn’t make us invulnerable. It’s true that we’re not in any trouble right now (in fact, just the opposite since the rest of the world looks even shakier than we do) and there’s no reason we should be cutting back on spending during a massive recession. But surely the long-term picture is less rosy than Galbraith makes it out to be?

But I’m no economist. Maybe I just don’t get it. However, I’ve waited a few days to post about this, and I still haven’t seen any real economists comment on this. Anybody want to take a crack at it?