James Joyner pushes back on my suggestion this morning that the whole “Organization Kid” meme is overblown:

It strikes me as highly probable that “Organization Kids” are much more highly represented in elite Washington than in society as a whole. Aside from nepotism, the way to get ahead in this town is to go to the right schools, punch the right tickets, and not piss too many people off.

….Post-Bork at least, every successful Supreme Court nominee has been a cipher who claimed to have no opinion on, well, anything. The less that’s known, the harder it is to mount an attack. That’s not a slam on the nominees 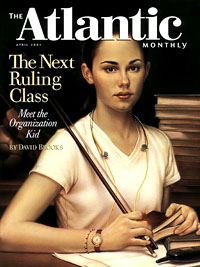 but rather on the system.

Well….sure. But aside from nepotism, hasn’t going to the right schools, punching the right tickets, and not pissing too many people off always been the way to get ahead in Washington? And in business? And in the military? And just about everywhere else? I’m just not sure that very much has really changed on this front recently.

As for Supreme Court nominees being ciphers, I don’t think that’s quite right either. Lots of them have past records. What is true is that confirmation hearings have become a joke in the post-Bork era, with nominees unanimously insisting that they can’t testify about any case that might ever come before the court, which, since it’s the Supreme Court we’re talking about here, means pretty much every possible case. This is indeed a problem with the system, but it’s not quite the same thing as nominees not usually having deep public records. In fact, most of them do, and Elena Kagan is a little unusual in this regard.

More generally, I think what’s going on here is that I’ve always been a little skeptical of the kinds of cultural memes that David Brooks (and others) traffic in, and I’ve grown even more skeptical as time goes by. I understand completely where the “Organization Kid” thing comes from, for example, and my gut tells me there’s something to it. But my gut tells me lots of things, and further reflection usually gives me pause. I don’t think kids of my generation were quite the rebels we’d like to imagine we were, and in any case we’ve mostly grown up to become an awful lot like our parents and grandparents. Some of us are cautious, some of us are outspoken, and some of both kinds are running the world right now. Same as always. I think that turns out to be the case more often than not whenever kids of any generation are the subject. There are differences, but I’ve gotten to the point where I really, really want to see some solid evidence before I buy into whatever the latest theory/complaint/whine is.