President Obama wants a line-item veto. No surprise there: every president wants a line item veto, despite Peter Orszag’s admission that “[this] alone is not enough to cut waste [or] streamline government operations.” This is an understatement. Here in California the line item veto has been part of the governor’s powers forever, 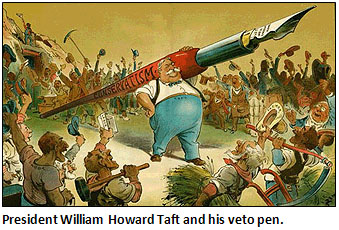 and it hasn’t had a noticeable impact on improving our fiscal rectitude. (Maybe you’ve noticed?)

Anyway: a true line item veto is unconstitutional. So instead the president is asking for “enhanced recission authority”:

Under this new expedited procedure, the President would submit a package of rescissions shortly after a spending bill is passed. Congress is then required to consider these recommendations as a package, without amendment, and with a guaranteed up-or-down vote within a specified timeframe.

As Stan Collender explains, this is basically the same authority the president has today with one change: under current law, if Congress does nothing with the president’s request then the spending stays intact. Under the new law, if Congress takes no action then the spending is halted. This allows Congress to avoid responsibility for spending cuts since they never have to take a vote to approve them. But would it be constitutional? Bruce Bartlett isn’t so sure and has a different suggestion:

I think there really is a much simpler way of getting around the constitutional problem — just repeal the part of the Budget Act which prohibits impoundment.

In essence, impoundment means that if the president doesn’t want to spend money appropriated by Congress he simply impounds it; i.e., doesn’t spend it. It has exactly the same effect as a line-item veto and is unquestionably constitutional — every president up until Nixon had and routinely used impoundment to control spending.

But in 1973, Nixon became heavy-handed in his use of impoundment, which outraged members of Congress of both parties. Legislation was drafted to eliminate impoundment and force the president to spend every penny appropriated by Congress exactly as Congress intended….Therefore, it would seem to me that simply getting rid of or amending the section of the Budget Act relating to impoundment could give the president de facto line item veto power in a way that would be much more effective than enhanced rescission authority and would certainly be constitutional.

OK, fine. Impoundment isn’t as elegent as enhanced recission, but it would almost certainly work. Unfortunately, Bruce’s potted history suggests why it doesn’t matter all that much: Congress doesn’t mind the practice too much as long its use is fairly trivial. But if a president actually uses it in big enough chunks to make a difference, they go nuts — and there goes your faux line-item veto.

But look: if it’s only used for occasional little doodaws and gimcracks, it’s hardly worth the trouble. It might be worth having just as a PR tool, or as a way of giving the president a bit of bargaining power over the budget, but not much more. So I have a hard time understanding why this topic is such a perennial favorite in Washington. If anyone were really serious about this, we would have approved a constitutional amendment giving the president a real line-item veto long ago.