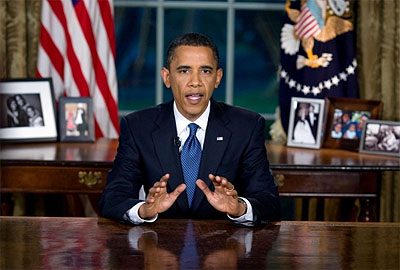 On Twitter, here was my insta-reaction to Obama’s oil spill address from the Oval Office:

What a terrible speech.

Unfair? Maybe! I mean, compared to Sarah Palin’s (literally) incomprehensible burbling on Bill O’Reilly’s show afterward it was a model of straight talk and reassurance. But that’s a pretty low bar.

So let’s unpack this a bit. The whole point of a prime time Oval Office speech (transcript here) is that it announces something big. On that score, Obama failed right from the start. He told us that lots of people are already working the cleanup. Yawn. That Ray Mabus is going to develop a long-term Gulf Coast Restoration Plan as soon as possible. A plan! Hurrah! That we’re gonna make BP pay for everything. Roger that. And then this: “I have established a National Commission to understand the causes of this disaster and offer recommendations on what additional safety and environmental standards we need to put in place.” A commission! So much for “going big.”

Look, maybe I’m just feeling cranky tonight. There’s nothing wrong with an investigating commission, after all. And I happen to think that Obama’s reaction to the spill has been substantively pretty reasonable. But if you’re going to give a big Oval Office speech and that’s the best you have to offer, then let’s face it: you don’t have much to offer.

But that wasn’t the worst of it. So far we’ve covered three of the four points Obama promised us at the beginning of his speech, and the fourth point was a call to action on clean energy. I still had some hope that maybe he’d redeem himself there. But here, for the edification of future generations, are my contemporaneous notes during this part of his speech:

now is the moment for this generation to embark on a mission.

house bill is great. but happy to look at other approaches. yeesh.

great nation, we can do anything, blah blah blah

Unfair again? Maybe! After all, I’m the one who thinks the votes for a serious energy bill just flatly aren’t there in the Senate, and maybe it’s unfair to expect Obama to engage in a political suicide mission. Still, take a gander at what he said:

Last year, the House of Representatives [passed] a strong and comprehensive energy and climate bill — a bill that finally makes clean energy the profitable kind of energy for America’s businesses. Now, there are costs associated with this transition. And some believe we can’t afford those costs right now. I say we can’t afford not to change how we produce and use energy — because the long-term costs to our economy, our national security, and our environment are far greater.

So I am happy to look at other ideas and approaches from either party — as long they seriously tackle our addiction to fossil fuels. Some have suggested raising efficiency standards in our buildings like we did in our cars and trucks. Some believe we should set standards to ensure that more of our electricity comes from wind and solar power. Others wonder why the energy industry only spends a fraction of what the high-tech industry does on research and development — and want to rapidly boost our investments in such research and development.

All of these approaches have merit, and deserve a fear hearing in the months ahead. But the one approach I will not accept is inaction….What has defined us as a nation since our founding is our capacity to shape our destiny — our determination to fight for the America we want for our children. Even if we’re unsure exactly what that looks like. Even if we don’t yet know precisely how to get there. We know we’ll get there.

This gives pablum a bad name. Obama wants a bill. Pretty much any bill will do. But he didn’t say a single word about what he himself wanted. A carbon tax? Cap-and-trade? Nuclear subsidies? Electric cars? Who knows? And as Kate Sheppard notes, he didn’t breathe so much as a word about climate change.

I dunno. This speech felt entirely by-the-numbers to me. He told us about the spill. He told us the best minds in the country were working on it. He told us BP would pay for it. He told us he was setting up some commissions. He said he wanted an energy bill of some kind. Then he told us all to pray. It felt like he was reading off a PowerPoint deck.

This is, by a long way, the most negative reaction I’ve ever had to an Obama speech. Even on Afghanistan, where I was dubious of his strategy and felt his address at West Point was technocratic and unconvincing, I thought his speech had at least a few redeeming features. But this one? There was just nothing there. I felt better about Obama’s response to the spill before the speech than I do now.

Too negative? Tell me in comments.