Is manic multitasking good or bad for us? I don’t know, but Tyler Cowen says he’s suspicious of research showing reduced performance for hypertaskers because they always impose a particular kind of multitasking on the test subjects:

I’m simply not convinced or even moved in my priors by these studies. I can’t operate a German Waschmaschine (imposed on me), and that’s without an internet connection running in the background.1 Nor would I do well if confronted by, say, the open internet windows of Brad DeLong, or his devices, whatever they may be, and in the broader scheme of things surely he counts as intellectually close to me. Yet overall my life runs quite smoothly.

To sound intentionally petulant, the only multitasking that works for me is mine, mine, mine! Until I see a study showing that self-chosen multi-tasking programs lower performance, 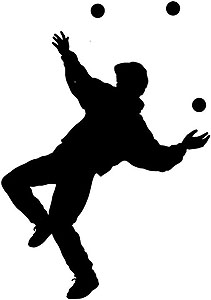 I don’t see that the needle has budged.

Obviously there’s something to this. When you choose a particular kind of multitasking and adapt to it, your performance might be dramatically different than it is when you’re multitasking in an unfamiliar environment that someone else dictates.

Still, I’d caution against trying to draw too many conclusions from personal experience, and that goes double for someone like Tyler. The problem is that Tyler is not just a smart guy. He’s not just a top 1% smart guy. He is, as near as I can tell, approximately a top thousandth of one percent smart guy. He’s off the charts smart, and that means his brain is nowhere within light years of being a good proxy for the vast majority of the rest of us. In diluted form, this also applies to the kind of people who read this blog (or Tyler’s): we might not all be supergeniuses, but we skew pretty bright and educated. Our experiences, our brains, our level of self-control, and our demographic breakdown just isn’t typical — and it’s double plus untypical of your average teenager.

Now, this works in the opposite direction too. Nick Carr, who wrote The Shallows, thinks his attention span has diminished since he started using the internet heavily. Me too. But guess what? Maybe it’s just because we’re aging and our interests have changed. Or maybe we’re engaging in rose-colored hindsight, overestimating just how focused we were in the past. Who knows?

What I can say is that I’m pretty firmly in the camp that thinks the internet and its increased focus on multitasking almost certainly has both a good and bad side. Reduced attention span is bad. Gracefully handling frequent interruptions is good. Why pretend otherwise? But these discussions always seem to break down pretty quickly between one side that thinks a bunch of fogeys are telling kids to get off their lawns and an opposite side that thinks we’re becoming a nation of distracted goof offs. I just don’t get this. Research is good. We should do more of it. That research is almost certain to suggest both positives and negatives from heavy use of the internet and heavy investment in multitasking, and there’s not much point in scoffing at whichever half you happen to dislike. We should welcome research that helps us understand what’s going on, and hopefully starts to give us some guidance about how each of us personally can figure what works and what doesn’t in a modern, hyperactive environment that, let’s face it, isn’t going to go away. Just don’t expect all the news to be good.

For more, see Jonah Lehrer here. He has a nice discussion of the general issues, one that distinguishes between internet use and multitasking, along with a reply from Carr.

1I’m actually not sure what this example has to do with anything, to be honest. I’d probably have a hard time figuring out how to work a German washing machine too. Still, consider the double-sided nature of what this might mean. On the one hand, some things in life are just hard to figure out whether or not you’re multitasking. On the other hand, perhaps this suggests that although people can find a multitasking routine that suits them for day-to-day use, it also makes it harder for them to respond to new and unforeseen problems that require them to tear themselves away from their routine. Maybe.

For another view on this, talk to any computer programmer and ask them about interruptions. Be prepared for an earful when you do, though.