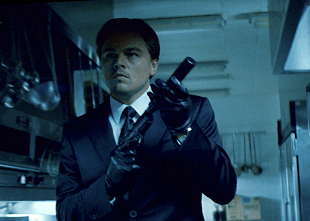 Do I really have to put a post about Inception below the fold even though it’s been out for over a week? I guess so. So it’s below the fold.

Once the rules about dying in one dream level were explained, the mechanism of that circularity became obvious, as did the fact that the “cliffhanger” would consist of whether or not Cobb was really in the really real world or just in another dream. Which is pot-logic; by which I mean, the sort of thing you say when you’re listening to Floyd in your dorm and everyone has their own bowl and is abusing it.

I agree except for one thing: was the question of whether the film took place in the real world really not obvious until the rules were explained? It seemed to me that it was obvious about five minutes in.

And to agree further: yes, it’s an annoying and hackneyed premise. Also yes: Inception is an astringent kind of film, more interested in showing off a visual style and exploring a puzzle than it is in packing an emotional punch. But that’s true of most Christopher Nolan films, isn’t it?

For all that, I still liked it OK. Not every film has to rely on making us identify with the characters. Sometimes a humanistic austerity is OK. And the visuals were arresting and the story was clever. At least, I think it was clever. I can’t say for sure since Nolan sort of lost me toward the end.

As for the key question that Scott asks: of course the whole film was a dream. Do you actually believe there’s a real world in which Saito could buy an entire airline within a matter of days when the time arrives to perform the inception? Sheesh. Batman and Ra’s Al Ghul are easy to believe in compared to that. Gotta be a dream.