Today we have Adventures in Cat Science™! First some background: I feed the cats dry food twice a day. Inkblot normally makes a huge production out of this, meowing pitifully and pacing around and then, after I fill the dish, bowling over anything in his way to get to the food and start hoovering down his kibble. After he’s satisfied, he wanders off and Domino starts eating.

Now, I’ve never thought this was because Inkblot is an alpha cat. Not hardly. I just think he’s hungrier and more dedicated to eating than Domino is. Still, the 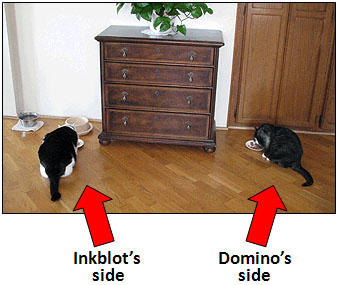 pecking order is what it is, and when it comes to food Inkblot has always been pretty clearly on top.

Or so I thought. Some more background: Once a day the cats get some wet food. I put it on two plates, and as the picture on the right shows, Inkblot’s is always on the left side of the cabinet and Domino’s is on the right.

Now for the Science™. A few days ago Marian woke up before I did and apparently got tired of Inkblot’s antics. So she fed the cats herself. But she does it differently. Instead of just dumping food into the bowl, she picks up the bowl, puts it on the counter, dumps in the food, and puts the bowl back on the floor. Except this time, for some reason, she put the bowl over on the right. And guess what? Domino was first to the kibble and it was Inkblot who paced around nervously waiting for his turn.

Obviously one experiment isn’t Science™. But two? You bet. So I tried this myself, and sure enough: if the food is over on “Domino’s side,” she gets first crack at it. Our cats have apparently been territorially trained to regard spots three feet apart as belonging to one or the other. Isn’t this thrilling? It should be. It’s Science™!

But the experiment is over. Poor Inkblot was humiliated by the whole thing, I think. As senior cat, I figure he’s entitled to a few perks, and getting first crack at the food is one of them. So the bowl is now back on the left for good. And everyone is happy.

As for normal catblogging, it’s below. This is summertime sun worshipping, Domino opting for the full treatment while Inkblot opts for the shade. Either way, they both love flinging themselves on the ground and rolling around when the weather is warm 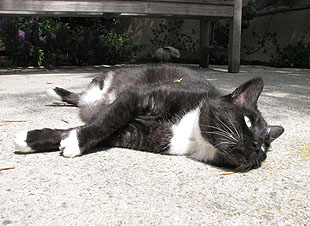 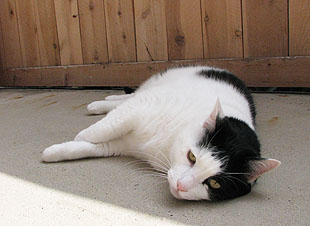