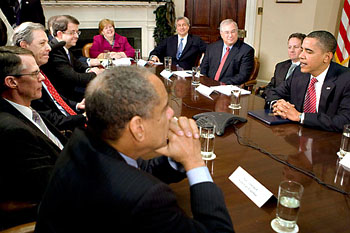 Mike Konczal captures perfectly some of the concrete ways in progressives are right to be pretty dissatisfied with the Obama administration over financial reform:

I do think Treasury could have moved this bill in a lot of ways. They set the terms under which the debate would unfold. And whenever they got involved with Congress, they pushed for less structural reforms. They pushed for the solution that embraced the status quo with arms wide open.

Examples? Off the top of my head, ones with a paper trail: They fought the Collins amendment for quality of bank capital, fought leverage requirements like a 15-to-1 cap, fought prefunding the resolution mechanism, fought Section 716 spinning out swap desks, removed foreign exchange swaps and introduced end user exemption from derivative language between the Obama white paper and the House Bill, believed they could have gotten the SAFE Banking Amendment to break up the banks but didn’t try, pushed against the full Audit the Fed and encouraged the Scott Brown deal.

That’s it in a nutshell. The final shape of the financial reform bill, even after it got watered down in conference, is decent enough to be well worth passing. But it’s decent almost entirely because of amendments that were tacked on during the final two months of debate, not because the White House tried to introduce a decent bill in the first place. And to make it worse, as Mike notes, the White House actually opposed most of the amendments that improved financial reform from a D to a B-.

In one sense, it doesn’t matter who was responsible for what. The final bill is the result of a complex dance between the White House, the Treasury, and Congress, and it’s silly to give too much (or too little) credit to any one of them. But the fact remains that Obama’s team has been pretty weak on financial reform from the start. Whether this was from political miscalculation or genuine conviction I don’t know, but neither one reflects well on them.

Of course, none of this changes the fact that Obama is still a business-hating, job-killing, government-loving, socialist wannabe. But he would have been that no matter what. He should have just done the right thing and not worried too much about it.