National Review editor Rich Lowry tweets, “If you read one piece on housing policy — and I know you might — make it this one.” Well, I think I’ve already read about a hundred pieces on U.S. housing policy, but hey — what’s one more? So here’s “We Can’t Afford This House,” by Christopher Papagianis and Reihan Salam:

At the end of June, the House of Representatives voted to extend the $8,000 homebuyers’ tax credit, by an extraordinary margin of 409–5. The Senate approved the measure on a voice vote. At a polarized political moment, this near unanimity was noteworthy in itself. Conservative Republicans and liberal Democrats, 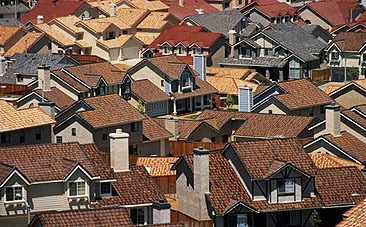 from cities and suburbs and small towns across the country, joined together to shower a bit more taxpayer largesse on one of America’s favorite industries: real estate. But there’s a problem with this bipartisan idyll.

Though the homebuyers’ credit was sold as a stimulus measure, we have no reason to believe that it is anything other than another wealth transfer to a large and powerful industry, one with allies conveniently situated in every congressional district. Casey Mulligan of the University of Chicago has suggested that the credit had almost no economic impact. As Harvard economist Edward Glaeser observed, it did little more than create an incentive for “mindless house swapping.” It didn’t even have a meaningful impact on the behavior of first-time homebuyers — people already planning to make purchases simply moved them forward a few months. Yet this is where we find a consensus in policymaking: We can’t agree on balancing the budget or reforming entitlements or the tax code, but we can agree to churn the housing market so that a handful of real-estate agents can make a buck on commissions while the economy crumbles.

It’s a pretty good piece, and it gives me a chance to distinguish between good and bad in this particular genre. It’s almost indisputable, I think, that the federal government has massively favored the expansion of homeownership over the past six decades. Government policy in a wide variety of areas — taxes, veterans programs, mortgage securitization, etc. — have all been designed to make homeownership ever more attractive for an ever greater portion of the population.

This is the good version of this story, and Papagianis and Salam do a good job with it. The bad version, which stories like this devolve into way too often, is to specifically blame the recent housing bubble on the Community Reinvestment Act and the GSEs — Fannie Mae and Freddie Mac, who are charged with buying up and securitizing conforming mortgages. Now, as near as I can tell, the CRA simply had nothing to do with the housing bubble at all. Blaming the CRA is just a plain invention designed to somehow blame Jimmy Carter and liberal race guilt for a housing bubble that was primarily engineered by Wall Street. The Fannie/Freddie story is a little more complicated, but most of the evidence I’ve seen suggests that although they were far from faultless in the housing bubble, they simply weren’t a big driving factor. They screwed up badly, and taxpayers are going to pay a lot of money to make up for their screwups, but they were mostly following the market, desperately trying to regain market share from private actors who were extending ever screwier loans in an effort to prop up the great derivative machine that was making so many Wall Street bankers rich. Fannie and Freddie made things worse, but it was Wall Street that was driving the show.

So that’s the good and the bad. If by “government policy” you mean the CRA and the crude version of the Fannie/Freddie story, you’re just demagoguing. But if by “government policy” you mean the vast panoply of federal and state preferences for homeownership that have built up over the past half century, then you have a pretty good point to make. Papagianis and Salam tell the latter story, and it’s worth a read.

It’s hard to imagine anything actually happening, of course, because there are far too many homeowners who are registered voters to allow all these goodies to be taken away. It’s the kind of thing that could only be done on a bipartisan basis, and the odds of that are slim indeed. But without that, Democrats won’t dare do anything even if they were inclined to. The status quo has us stalemated.