Atrios on the Obama administration’s weak response to the recession:

I’m sympathetic to the argument that a bigger stimulus couldn’t have gotten through Congress. So what did they do wrong? They failed to actively support judicial bankruptcy for primary residence first mortgages (aka cramdown) and they totally screwed up HAMP. The latter was entirely under their control and the former would have stood some chance of passing if the White House had thrown its weight behind it. It didn’t.

Actually, it’s even worse than that! Stephen Labaton of the New York Times, who has done some of the best reporting on the legislative nuts and bolts of financial reform, wrote the definitive account last June of how the banking industry 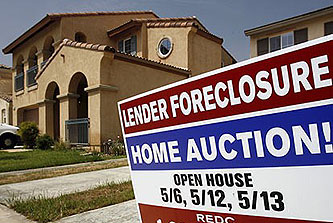 teamed up with Republicans and centrist Democrats to defeat the cramdown proposal. Their secret? Lots of money, a solid front of opposition from Republicans, and, yes, a lethargic effort by the White House:

In the end, the banks’ startling success in defeating the provision, which was pushed hardest by Senator Richard J. Durbin, Democrat of Illinois, caught even their lobbyists by surprise. Not only did they defeat the cramdown provision, but the banks walked away with billions in new bailout money.

….While Mr. Obama reaffirmed his support for the proposal shortly after becoming president, administration officials barely participated in the negotiations, a factor that lobbyists said significantly strengthened their hand. Lawmakers who have discussed the issue with the administration said that the president’s senior aides had concluded that a searing fight with the industry was simply not worth the cost.

Moreover, Timothy F. Geithner, the Treasury secretary, did not seem to share Mr. Obama’s enthusiasm for the bankruptcy change. Mr. Geithner was lobbied by the industry early. Two days after he was sworn in, he invited Mr. Fine from the community bankers to his office for a private meeting. The association, with influential members in every Congressional district, is one of Washington’s most powerful trade groups.

….While Mr. Durbin had trouble rounding up Democratic votes, Republican leaders kept their members — and potential renegade banks — in line….There was no counterweight to that legislative muscle. Bankrupt homeowners do not have a political action committee or lobbyists.

Mr. Fine reports that the political action committees run by his association alone have built a war chest of nearly $2 million, a 40 percent jump over the last year, even though members have had to cut other expenses in the recession. “The banks get it,” Mr. Fine said. “They understand you need a strong political action committee to get access to the fund-raisers. That’s where the lawmakers are.”

Italics mine. And I hope you paid attention to the first one: not only did the banks kill the cramdown proposal, they walked away with billions in extra bailout money for their trouble. And remember, this all happened in April of 2009, when the banking industry was at its absolute nadir. Isn’t America great?