Whenever a favorable-to-progressives judicial ruling come down, the concern trolls come out of the woodwork to fret about the backlash. So in the wake of a win for the left on Proposition 8 in 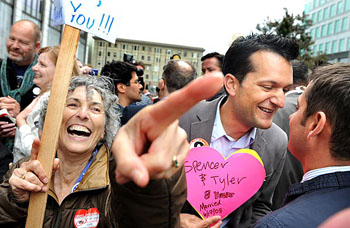 California, I wanted to go on record alongside Ryan as thinking such concerns are, when genuine, wildly overblown.

The American political system has a lot of features that differentiate it from most modern liberal democracies. These features include an unusually large number of veto points and also a greatly empowered federal judiciary. I’m not a huge fan of either feature, but the system is what it is and the interplay between the two means that responsible political advocates will always want to use all the levers at their disposal — including litigation — in order to get their way. Once laws are on the books, overturning them is generally an extremely cumbersome process. Merely persuading most people that you’re right doesn’t do the trick. And the system doesn’t really function in a “majoritarian” way at any level so the non-majoritarian aspects of seeking policy objectives through the courts don’t differentiate them from anything else.

I agree. There’s no doubt that judicial decisions create backlashes, but the evidence is pretty thin that they create backlashes that are any worse than legislative or executive decisions. For better or worse, everyone involved in the American politics is now well aware that courts are an important part of the political process and they’re fair game to be exploited as effectively as possible. That’s just the way things are, and both sides play the game equally hard.

In this case, however, there’s a different concern: using the judicial system might be perfectly kosher, but was it wise? The answer is: only if you win. And there are pretty substantial doubts that yesterday’s victory will hold up all the way to the Supreme Court. Judge Walker’s mountainous finding of facts aside, do we really think the Supreme Court is ready to rule that every state in the union is required to allow same-sex marriage? Maybe! But the odds seem long, and if we lose the case it’s likely to be a decade or two before the court is willing to reconsider.

In the end, that might not be so bad. There’s still a chance of winning, and a loss only means that we go back to state-by-state battles, which is exactly where we are now. But it’s still a key question.