John Scalzi tries to figure out why Scott Pilgrim vs. the World didn’t do very well on its opening weekend:

What is the core audience of Scott Pilgrim vs. the World? Well, when I saw it this weekend, the members of the audience were mostly under 30 and (visually) equally distributed between stereotypical nerds and 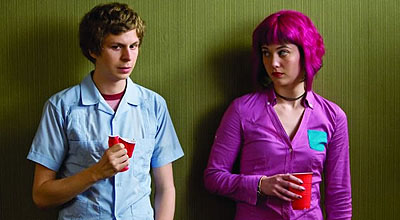 stereotypical hipsters. There were enough snarky T-shirts and chunky black-frame glasses to fill a coffee shop next to an Apple store.

But only enough of them to fill that one coffee shop — and this is the problem, commercially speaking. Nerds and hipsters love what they love, and, while they love it, they love it with the white-hot intensity of a thousand obsessive-compulsive suns (and when they stop loving it, they hate you for still loving it — but that’s another column entirely). But hipsters and nerds — and the occasional hipster nerds — aren’t in themselves a big enough audience to move the box-office needle any appreciable distance.

This is a fine observation, but I’d like to propose an alternative. Or a complement, perhaps: it just wasn’t a very good movie. Not terrible. Just not very good.

Now, I know what you’re thinking. I’m not the target audience for a “postmodern hipster-nerd fantasy.” I’m a bit of a nerd, and I like fantasy fine, but I’m middle-aged, aggressively un-postmodern, and even more aggressively un-hipster. So maybe I just didn’t get it.

Well, sure. It was probably never likely to make my all-time top ten list. But my reaction was actually a lot simpler than that. The plot of the film, such as it is, concerns Scott Pilgrim’s series of fights against his would-be girlfriend’s seven evil exes. Fine. So half an hour into the movie we have the first of these stylized videogame fights. Wam bam slam tinkle tinkle. Scott Pilgrim wins. Hooray! And immediately — immediately — I thought, “Six more of these? I wonder how they’re going to create seven fight scenes that are different enough to stay interesting?”

I don’t think I’m giving anything away to say, they don’t. The fights aren’t identical, and all of them have a quirk or two that might make you smile ironically, but basically they’re all the same thing. And there’s only so much of that you can take. There’s some sweet stuff in between the fights, the dialog isn’t bad, and the characters are goofy and sort of endearing. But after the first half hour, two-thirds of the movie is just a series of nearly identical stylized combat scenes. I don’t know if it was ever likely to break out beyond its core audience, but I think it needed a lot more narrative and lot less fight to have even a chance.