Speaking of housing, Dean Baker is unhappy with the likely resolution to the collapse of Fannie Mae and Freddie Mac, and I think he makes a pretty good point. Fannie and Freddie are in the business of buying 30-year fixed rate loans from the banks that originate them, and if it simply did that and nothing more as a fully public institution it would probably be OK. 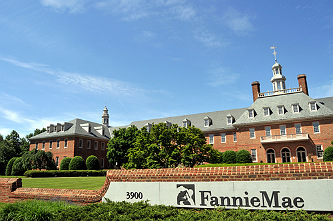 Alternatively, we can simply get rid of them entirely:

We know that the private sector can and does issue mortgages without government support. This is demonstrated by the existence of the jumbo mortgage market. Jumbo mortgages exceed the size limits set for a loan to be purchased by Fannie and Freddie. Even in the current environment the spread is only 90 basis points (9/10ths of a percentage point) compared with the Fannie/Freddie backed conformable mortgages, and it is typically much less.

Dean believes — and I agree — that we should choose one of these alternatives. Either Fannie and Freddie are public institutions guaranteed by the federal government, with the risk of running them fully transparent, or else the secondary mortgage market is entirely private and everyone knows there’s no government guarantee behind it. But that’s not where the conversation is going:

Instead, the consensus seems to be to design some hybrid model in which private profit-making banks will decide which mortgages will get a government guarantee. We are assured by the housing finance wizards that the government regulators will effectively police the private banks. The basic issue is the problem of moral hazard: Private banks have incentive to issue the guarantee to the worst junk around, since they can will make money on the process and the risk goes to the government. It is difficult to believe that anyone who has lived through the crisis of the last three years would want to re-establish this sort of situation.

Status quo bias is hard to overcome, unfortunately. My own tentative take is that Fannie and Freddie should simply be phased out over a period of years and allowed to die. Regulated private markets can probably sustain housing just fine these days, and I’m just not sure we need a huge federal bureaucracy to provide homebuyers with a slight interest rate bonus.

More generally, I think we provide home buyers with too many bennies already, and we’d probably all be better off if we allowed the market to set prices here without the distorting influence of federal supports. I’m fine with the government getting involved when there’s a clear market failure (as there was when Fannie Mae was first set up) or if there’s some need to make a benefit universal (as with Social Security or Medicare). But I don’t think either of those applies to the contemporary housing market, so why not just get the feds out of the mortgage business altogether? I’m open to good arguments to the contrary, but I haven’t really heard any yet.