Why did California’s Proposition 8, which banned gay marriage, pass in 2008? Obviously some groups voted for it in larger numbers than others, but in the LA Times today David Fleischer takes a look at which groups changed their votes as the campaign progressed:

The shift, it turns out, was greatest among parents with children under 18 living at home — many of them white Democrats.

The numbers are staggering. In the last six weeks, when both sides saturated the airwaves with television ads, more than 687,000 voters changed their minds and decided to oppose same-sex marriage. More than 500,000 of those, the data suggest, were parents with children under 18 living at home. Because the proposition passed by 600,000 votes, this shift alone more than handed victory to proponents.

….One final false assumption by same-sex marriage supporters was that the election was so close that it will be easy to pass same-sex marriage the next time out. It’s true that the official election results — 52% to 48% — appeared quite close. But the truth is more complicated. The data we analyzed show that the No on 8 campaign benefitted from voter confusion.

Polling suggests that half a million people who opposed same-sex marriage mistakenly voted against the proposition. They were confused by the idea that a “no” vote was actually a vote for gay marriage. This “wrong-way voting” affected both sides, but overwhelmingly it helped the “no” side. Our analysis suggests that the division among California voters on 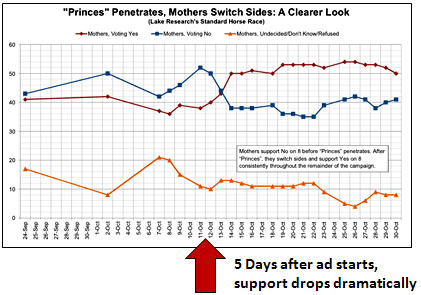 same-sex marriage at the time of Proposition 8 was actually 54% to 46% — not so close. We are actually 1 million votes away from being able to reverse Proposition 8.

Fleischer suggests that the big turning point came when the Yes on 8 campaign started airing the “Princes” ad (“Mommy, mommy, I learned how a prince married a prince and I can marry a princess!”). Shortly after that, as the chart on the right shows, mothers with young children dramatically changed their views, going from 52%-38% opposition to 50%-38% support.

Anytime an election is close, as the Prop 8 election was, there are dozens of things you can point to as the difference maker. So this isn’t necessarily the last word. Still, it’s a pretty good demonstration of just how easy it is to demagogue gay marriage, even in liberal California. We’re getting closer, but we’re not there yet. The full report is here.