In Edge City, Joel Garreau offers up a semi-humorous glossary of developer terms. Here’s one:

Ample Free Parking: The touchstone distinction between Edge City and the old downtown.

Of course, all that free parking isn’t entirely a result of the free market. Much of it is the result of minimum parking regulations, which require both residential and commercial developers to provide a certain number of parking spaces for their buildings. 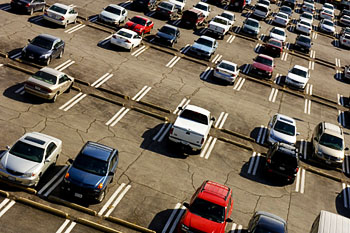 Now, it’s obvious why people with cars like these regulations (makes driving convenient, keeps overflow parking out of neighborhoods), but it’s pretty clearly a government mandate and you’d think that a libertarian outfit like the Cato Institute would be opposed to them. But, as Matt Yglesias points out, apparently Cato’s Randal O’Toole isn’t:

The latest hot front in this can be found in Donald Shoup’s evisceration of O’Toole’s views on minimum parking regulations. I recommend that you read the whole thing. But a quick summary is that O’Toole seems to have somehow persuaded himself that regulatory parking mandates don’t lead to artificially cheap parking and that artificially cheap parking doesn’t lead to artificially high quantities of driving. And he’s supposed to be the libertarian in this argument!

I don’t think there’s much question that O’Toole is wrong here. You can argue about how big the problem is and what kind of impact it has, but there’s not much question that minimum parking regulations make driving cheaper and therefore incentivize people to drive more than they otherwise would. The only part of this argument I’m a little fuzzy on, though, is why it’s recently gotten so much attention. Sure, parking is part of the infrastructure that promotes the use of cars, but my first guess is that it’s a smallish part. Maybe I’m wrong about that. But the scale of the infrastructure we’ve built over the last century to adapt to heavy use of automobiles is vast almost beyond comprehension, and parking at the margins seems like a small part of it. I guess every little bit helps, but aren’t there way bigger ways we could encourage less driving than raising the price of parking meters in busy commercial districts or letting suburban malls build smaller parking lots? Why not focus more on those, instead of a modest reform that seems practically designed to be as conspicuously annoying to registered voters as possible?

UPDATE: Atrios responds: “I think the reason parking requirements and mandatory free parking are getting more attention now is because more and more people are understanding that this rather simple policy choice is what has led to pedestrian-friendly development being illegal in most of the country.”

I think I get this, but this is actually a specifically urban issue, isn’t it? And not even in all urban areas. If the argument is strictly about specific policies (curb cuts, street parking) that ruin potentially walkable urban areas, then I see the point. But that’s different from minimum parking regulations more generally, isn’t it?