Ah, tennis. The rain-delayed U.S. Open — currently suffering through yet another rain delay — is on right now, and twitterer @jenningscraig says, “Would love to hear some commentary on this year’s tourney.” Sadly, though, the truth is that I’ve only watched bits and pieces of the Open this year. In fact I find myself following tennis less and less every year.

Why? Because it’s gotten boring. Sure, today’s players are phenomenal athletes, covering the court like gazelles and routinely hitting breathtaking shots. But every match is the same, what I’ve come to think of as “thug tennis”: huge topspin forehands, booming two-handed backhands, and endless baseline rallies. 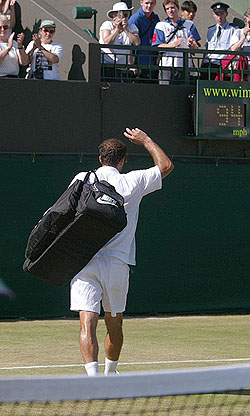 The power and shotmaking are mesmerizing at times, but in the end, I can hardly tell the players apart these days.

I always thought that the beating heart of tennis was in the matchups between the top baseliners and the top serve-and-volleyers. Brilliant points, contrasting styles, and blinding speed. I loved those matches. Borg-McEnroe. Lendl-Edberg. Sampras-Agassi. But a few years ago the last generation of serve-and-volleyers retired — guys like Sampras, Rafter, Henman, and Martin — and today, thanks to improved racket technology that favors returners more than servers, there aren’t any left in the top ranks. The clay court season now lasts 12 months a year.

And so I’ve slowly lost interest. Roger Federer is the last player who’s really attracted my attention: he’s a baseliner like everyone else, but it’s a different, more fluid style that’s a joy to watch regardless. And at least he has a one-handed backhand to set him apart a little bit. But that’s about it. I still watch tennis, but I’m not glued to the set and I don’t really mind that much if I miss a final — especially if Federer isn’t in it. When he retires I’m not sure if I’ll bother watching very much at all anymore.

I know the current state of the game has lots of fans, but aside from an intellectual admiration I just can’t work up a lot of enthusiasm these days. In the end, new racket technology and the coaching that went along with it have finally conspired to spoil the game for me.