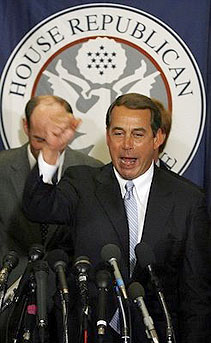 The latest hot topic of Beltway conversation is whether the current Republican leadership in Congress can survive a tea party putsch after the midterm elections. John Boehner recently suggested that a government shutdown wasn’t on his agenda for next year, and Jon Chait thinks that could be a problem for him:

Here’s the problem. If Republicans want to defund the Affordable Care Act in 2011 — and it’s their highest priority — shutting down the government is the only way to go. So Boehner is signalling to his rank and file that they have to abandon their most fervent demand.

I think he’s about one gaffe away from being deposed and replaced with somebody more willing to indulge Tea Party fantasies.

If anybody wants to start up a Republican establishment Dead Pool, I’m picking Boehner.

A few things here. First, I’m sure that Boehner’s comment was purely for public consumption. Democrats are trying to damage the Republican brand with independents by making Boehner the public face of Republican intransigence and corporate lackeyism. So he’s trying to make some nice, statesmanlike noises in order to fight that. I doubt he means a word of it.

Second — and here I’m going out on a limb — I say that tea party anger is going to start dissipating as soon as the elections are over. It won’t go away entirely, but let’s face it: the primary motivation of the tea partiers isn’t deficits or spending or even healthcare reform. It’s loathing of Obama and his fellow liberals. Once they take that scalp, a huge chunk of their energy is going to vanish overnight.

Third, choosing a party leader is the ultimate in inside exercises. Sure, Boehner could lose his office, but it seems unlikely in the extreme. If Republicans retake the House, he’ll be the guy who led the revolt, and even if some of the incoming freshmen don’t support him he’ll retain the loyalty of virtually the entire current caucus. What’s more, on November 3rd he’ll start making the appropriate noises and the tea partiers will swoon. I think he’s pretty safe.

Unless Republicans don’t take the House, of course. In that case, he’s road kill.