White House officials complain bitterly about the constraints the filibuster places on them, and rightly so. But they’ve expended relatively little energy speaking out about it and even less energy (as far as I know) actually trying 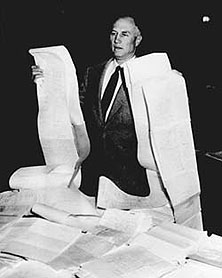 to end it. That’s not the only reason for their political struggles or even the main reason, obviously, but it certainly hasn’t helped.

I dunno. Seriously, what could Obama have done on this score? He has no authority over Senate rules. Nor would using the bully pulpit do much good since the subject is too arcane for most of the public to care about, especially with everything else that was on the agenda over the past two years. (You think it’s hard to get people excited about healthcare reform in the middle of a recession? Try getting them excited about procedural reform in the Senate. I can only imagine the derision Obama would be facing if he’d spent lots of time on this in 2009 when he should have been focused like a laser on jobs, as all the pundits keep reminding us.) What’s more, even in theory the filibuster can only be eliminated at the beginning of session. So jabbering about it wouldn’t have done any good anyway.

And comparing this to George Bush’s constant call for “up or down votes” doesn’t seem relevant either. Did that ever really do him any good? Aside from judicial appointments, I don’t think the filibuster was really a big issue for Bush. For better or worse, he mostly chose to push bills that (a) could be passed by reconciliation — like the 2001 and 2003 tax cuts, (b) had plenty of Democratic support — like NCLB and the war resolution and the PATRIOT Act and Medicare prescriptions and the bankruptcy bill, or (c) that he didn’t really like but caved in on — like Sarbanes-Oxley and McCain-Feingold. His biggest failure came on Social Security privatization, and that was so unpopular it probably didn’t even have 50 votes. The filibuster just wasn’t an issue.

I’d like to see the filibuster eliminated and I’d like to see unanimous consent eliminated. (For the latest abuse on that score, click here.) But the big issue here isn’t Obama, I think. It’s whether Harry Reid can round up even 50 votes for it when the 112th Congress meets in January. Maybe the president could help this along, but then again, he might just make things worse too. Senators haven’t historically been too excited about presidents trying to push them around, after all.

Democrats haven’t played this issue well, but that’s where I’d put the blame. I’m not sure Obama had as much leverage here as people are suggesting.