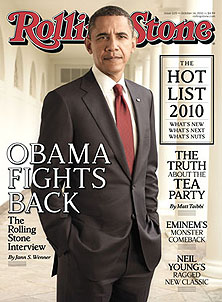 Jann Wenner reports in Rolling Stone today that after his recent interview with President Obama was over, Obama returned briefly to the Oval Office and tacked on a coda, speaking “with intensity and passion, repeatedly stabbing the air with his finger”:

It is inexcusable for any Democrat or progressive right now to stand on the sidelines in this midterm election. There may be complaints about us not having gotten certain things done, not fast enough, making certain legislative compromises. But right now, we’ve got a choice between a Republican Party that has moved to the right of George Bush and is looking to lock in the same policies that got us into these disasters in the first place, versus an administration that, with some admitted warts, has been the most successful administration in a generation in moving progressive agendas forward.

….If we want the kind of country that respects civil rights and civil liberties, we’d better fight in this election. And right now, we are getting outspent eight to one by these 527s that the Roberts court says can spend with impunity without disclosing where their money’s coming from. In every single one of these congressional districts, you are seeing these independent organizations outspend political parties and the candidates by, as I said, factors of four to one, five to one, eight to one, 10 to one.

We have to get folks off the sidelines. People need to shake off this lethargy, people need to buck up. Bringing about change is hard — that’s what I said during the campaign. It has been hard, and we’ve got some lumps to show for it. But if people now want to take their ball and go home, that tells me folks weren’t serious in the first place.

If you’re serious, now’s exactly the time that people have to step up.

Well, that’s not going to be popular with Obama’s lefty critics, though obviously you’d expect a mushy sellout like me to agree with him. And I do! But I’d also make a distinction. If you’re, say, Glenn Greenwald, I wouldn’t expect you to buy Obama’s defense at all. All of us have multiple interests, but if your primary concern is with civil liberties and the national security state, then the problem isn’t that Obama hasn’t done enough, it’s that his policies have been actively damaging. There’s just no reason why you should be especially excited about either his administration or the continuation of the Democratic Party in power.

On the other hand, if your critique is the broader and more common one — that Obama has moved in the right direction but has been too quick to compromise and hasn’t accomplished enough — then I think you should take his defense of his record way, way more seriously. It’s all too easy, like Velma Hart, to convince yourself that he could have waved a magic wand and gotten a bigger stimulus and a better healthcare bill and stronger financial regulation and a historic climate bill. But honestly, you have to buy into some pretty implausible political realities to believe that (Olympia Snowe would have voted for a trillion-dollar stimulus, there were Republican votes for a climate bill if only it had been a bigger priority, healthcare reform could have been passed via reconciliation, Harry Reid could have unilaterally ended the filibuster, etc.). The votes just weren’t there and the president’s leverage over centrist Dems and recalcitrant Republicans just wasn’t very strong. Maybe he could have done better, but the evidence says that, at best, he could have done only a smidge better.

And the alternative? Well, if the prospect of ripping apart healthcare reform, shutting down the government, deep sixing START, slashing social spending, and reliving the glory days of investigations over Christmas card lists isn’t enough to get you motivated, I guess I’m not sure what is. I wish I got more warm and fuzzies from Obama too, and I wish, like Mike Tomasky, that his “fetish of not kowtowing to public opinion” were a little less ostentatious. But letting Darrell Issa take over the House Committee on Oversight and Government Reform doesn’t seem like a very good way of getting that message across.

OK then. I think I’ll go donate a hundred bucks to someone. Who do you think it should be?