The Washington Times reports on a scandal within the United States Postal Service: is Priority Mail™ really as profitable as they say it is?

Two recent reviews by the Postal Service’s office of inspector general have raised concerns about whether postal officials understated advertising costs to promote Priority Mail. The reduced ad expenses could make Priority Mail appear more successful in reports submitted to postal regulators and, in turn, to the public.

….At issue is how the Postal Service split advertising expenses. For every dollar spent to promote Priority Mail, postal managers reported spending 70 cents on Priority Mail while reporting the other 30 cents as “institutional” advertising to promote the overall postal brand, records show.

But the inspector general found that the Postal Accountability and Enhancement Act of 2006 required managers to allocate all ad costs directly to the product, though not all postal executives agree. Postal 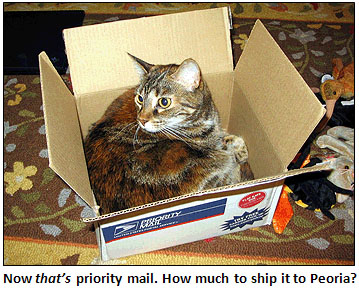 officials declined to comment Tuesday, but stood by a written response submitted to the inspector general.

Stuff like this almost makes me a fan of privatizing the postal service once and for all and being done with it. As a former product manager, I’m aware in mind-numbing (and often infuriating) detail of the vagaries of cost accounting and expense allocation among product lines, and there’s just not much science to it. Does 30% of all those Priority Mail ads actually promote the general USPS brand? 40%? 10%? Who knows? In a normal corporation, a couple of product managers would duke it out with competing self-serving arguments, someone in accounting would make a decision, and that would be the end of it. (Until the losing product manager decided to renew the battle.) But in the USPS this produces not one, but two full-fledged investigations from the inspector general. Yeesh.

You know, if the postal service were allowed to account for its pensions the same as anyone else, it would be in fine financial shape and there’d be no talk of killing off Saturday service. So why not privatize and let them? Because of the universal service requirement, of course. If you allowed private competition in first class mail, someone would very quickly snap up delivery in dense urban and suburban areas for less than 44 cents an ounce. The postal service, stuck with its universal service requirement, would then have to raise rates astronomically until eventually it would have virtually no business left except for rural areas at two bucks an ounce or something. So much for universal service.

Of course, if you don’t care about universal service, then privatizing the post office might be a great idea. Let ’em set different rates for different areas and then fight it out with anyone else who wants to deliver first class mail too. Any takers?