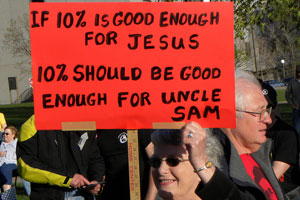 Nobody wants to repeal George Bush’s tax cuts for the middle class. Especially in a bad economy, this is a no-brainer, both politically and economically. But what about tax cuts for high earners? This should be an easy question to answer too. On the political side, a CBS poll earlier this week found that repeal is supported by 56% and opposed by only 36%. Economically, repeal would cut $700 billion off the federal deficit over the next decade and, because consumption by the wealthy doesn’t depend very much on small changes in income, it wouldn’t noticeably affect consumer spending either. Allowing tax rates on the rich to rise back to their pre-Bush levels, therefore, should also be a no-brainer, both politically and economically.

So how do you explain this?

A small but growing number of moderate Democrats are balking at boosting taxes on the rich. Many face electorates that recoil at the mention of any tax increase. Some represent areas that are loaded with wealthier taxpayers. Further, some incumbent senators who don’t face voters this fall are reluctant to increase taxes on anyone while the economy remains sluggish. Without their support, the push to raise rates on the rich probably will fail.

….Rep. Gerald Connolly, D-Va., represents the northern Virginia suburbs of Washington, one of the nation’s wealthiest districts. Median family income there in 2008 was $117,892, well above the national average of $63,211. He said that repealing the top rates would have political consequences. “Sometimes we forget 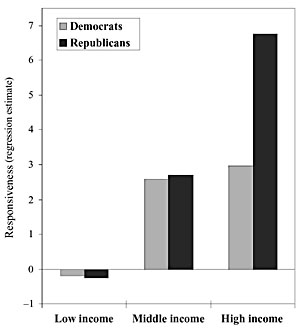 how we became the majority. We did it by winning some affluent districts,” he said.

That’s a strikingly candid assessment from Connolly. But it’s also wrong. As research from Princeton political scientist Larry Bartels demonstrated several years ago, American politicians are powerfully affected by the views of the rich, and this has nothing to do with any recent electoral trends.

Rather, as the chart on the right shows, things have been this way for a long time. Using data from voting records in the early 90s, it shows that the responsiveness of senators to the views of the poor and working class is….zero. Or maybe even negative. And that’s true for both parties. The middle class does better — again, with both parties — and high earners do better still. In fact, they do spectacularly better among Republican senators. And this disparity has almost certainly gotten even worse over the past two decades.

This is the shape of American politics. If your income is low — and probably a fair number of the 56% who want Bush’s tax cuts for the rich repealed are low-income voters — politicians simply don’t care. If you’re middle class they care a little more. But if you’re rich, then they really, really care. And it’s safe to say that most high earners are opposed to repealing tax cuts on high earners. That goes for all Republicans and a growing number of Democrats too. So what seems like a no-brainer isn’t as simple as it looks. Economically it makes sense to repeal Bush’s tax cuts for the rich, and a majority of American citizens are in favor of it. Unfortunately for them, they belong to the wrong majority. They’re not rich themselves, and increasingly in America, that means their votes just don’t count.