So Obama isn’t going to officially nominate Elizabeth Warren to head up the new Consumer Financial Protection Bureau. Josh Marshall comments on what Obama is going to do:

ABC’s Jake Tapper has a curious scoop, reporting that President Obama will name Elizabeth Warren not to run the new consumer financial protection bureau but instead will give her the previously unheralded “special 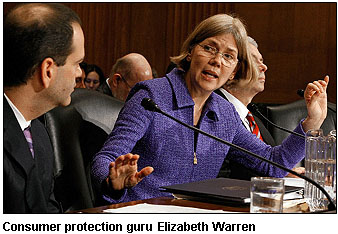 position reporting to both him and to the Treasury Department and tasked with heading the effort to get the new federal agency standing.” Get that?….I tend to agree with Matt Yglesias on this: “With Warren, Obama showing real innovation in developing odd, satisfying to nobody compromises.”

Matt seems to have changed his mind here, and I think his second take is the right one. It’s pretty obvious to anyone with a pulse that Republicans will filibuster Warren, thus sucking up Senate floor time that no one can afford with only a few weeks left before Congress goes into recess. At the same time, the CFBP needs to get off the ground, and appointing an unofficial interim head is a way of doing it. Warren is clearly the best choice for this.

I have no inside scoop on whether Obama or Tim Geithner “really” like Warren, but honestly, I’ve seen no serious evidence that either one of them is standing in her way. Geithner supposedly doesn’t like the grillings Warren has given him in the past, but come on. He’s a big boy, and in any case what better way of getting Warren out of his hair than giving her a job that will keep her too busy to bother him much? If George Bush had done something like this we’d all be gnashing our teeth about how he and Karl Rove were so committed to their base that they were once again cleverly bending the rules to evade Democratic opposition and why can’t wussy Democrats ever act like that too? Well, now one is. So bravo. Given the realities of Republican subjugation to whatever the Chamber of Commerce wants, this is a good solution. Then next year maybe Obama will just give Warren a recess appointment and that will keep her in place for a couple of years. What’s good for the goose is good for the gander, no?