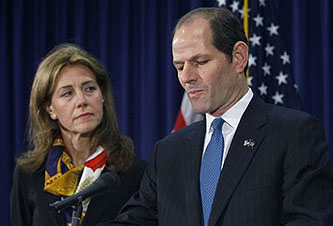 Eliot Spitzer’s fate isn’t a big concern of mine, but I think Matt Yglesias is exactly correct about why he was hurt more by his scandal than other politicians have been by theirs: because he allowed himself to be hurt by it.

I think the contrasting fates of Spitzer and guys like Clinton or Senator David Vitter (R-LA) shows that Spitzer’s problem was much simpler than [a lack of friends in high places] — he resigned. When a reasonably popular public official is hit with a scandal of a personal nature, the natural immediate first reaction of his same-party colleagues is to want to get rid of him. After all, no reason this guy should be a millstone around all of our necks. That leads to an initial torrent of criticism from friendly-ish sources and a wave of pressure to resign. But if you resist that first wave, apologizing for your conduct but refusing to apologize for your years of public service and highlighting the pernicious special interests who’d love to see you brought low, you basically flip the dynamic. Now you’re definitely going to be a millstone around everyone’s necks so the question becomes how heavy a stone?

Suddenly all your same-party colleagues have an incentive to defend you and to attack your enemies. Suddenly an incumbent Republican in Louisiana is just another guy with a safe seat. An incumbent President presiding over an economic boom is super-popular. And I bet an incumbent Democratic governor in New York could have cruised to re-election.

This seems to be nearly universally true. Sure, there are some things that a politician can’t bounce back from, but garden variety sex scandals and corruption charges aren’t among them. Especially in today’s supercharged partisan atmosphere, all you have to is tough it out and before long the folks on your side of the aisle will reluctantly line up behind you. Short of impeachment, after all, nobody can force you to resign, and if you time your scandal properly it will be “old news” by the time election season rolls around.

For all that we obsess over this stuff, the plain truth is that Americans don’t care much about sexual peccadillos. Liberals don’t care, conservatives don’t care, and social conservatives really don’t care. In fact, being a social conservative is practically like having a Get Out of Jail Free card in your vest pocket for this kind of stuff. All you have to is tearfully confess to your sinning, admit that you’ve let down both your family and the Lord, and promise to rededicate yourself to a life of virtue in the future with the help of your church and your supporters. If you do that, then as near as I can tell, you’ll be more popular than you were before. Sinning and repenting is the best proof there is that you’re really one of the family.

So anyway, Spitzer probably shouldn’t have resigned. If he’d gutted it out for a couple of months the whole thing would have gone away.