This has been on the back burner for a while as we dealt with a financial meltdown and a brutal recession, but Steven Pearlstein reminds us today of what our biggest and most enduring economic problem really is:

The fundamental economic challenge facing the United States is to get what we consume more in line with what we produce after years of living beyond our means. Obviously there are two ways to correct this imbalance — increase production or reduce consumption — and given the magnitude of the adjustment, it’s likely we’re going to have to do both.

….From a policy standpoint, this appears to put us in a terrible bind: either reduce unemployment by returning to our free-spending ways, or finish the job of reducing consumption by pushing unemployment up even further. For the moment, we’ve decided to choose neither. There is, of course, a way out of this bind: produce more without consuming more. For all practical purposes, that means grabbing a bigger share of global markets, either by exporting more goods and services, or replacing some of the stuff we import by producing it at home.

This, of course, was behind Barack Obama’s (largely empty) promise to double U.S. exports over the next five years. For that to happen, though, the dollar has to fall. Probably a lot. That makes U.S. exports to the rest of the world cheaper and everyone else’s exports to us more expensive. Martin Wolf comments:

To put it crudely, the US wants to inflate the rest of the world, while the latter is trying to deflate the US. The US must win, since it has infinite ammunition: there is no limit to the dollars the Federal Reserve can create. What needs to be discussed is the terms of the world’s surrender: the needed changes in nominal exchange rates and domestic policies around the world.

….China objects to the huge US fiscal deficits and unconventional monetary policies. China is also determined to keep inflation down at home and limit the appreciation of its currency. The implication of this policy is clear: adjustments in real exchange rates should occur via falling US domestic prices. China wants to impose a deflationary adjustment on the US, just as Germany is doing to Greece. This is not going to happen. Nor would it be in China’s interest if it did. As a creditor, it would enjoy an increase in the real value of its claims on the US. But US deflation would threaten a world slump.

….The US is going to win this war, one way or the other: it will either inflate the rest of the world or force their nominal exchange rates up against the dollar. Unfortunately, the impact will also be higgledy piggledy, with the less protected economies (such as Brazil or South Africa) forced to adjust and others, 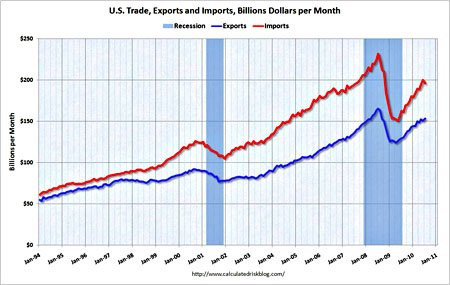 protected by exchange controls (such as China), able to manage the adjustment better.

Before the financial collapse of 2008 this was the big topic of conversation among macroeconomists. Virtually none of them predicted the havoc that the housing bubble would wreak, but they did predict the havoc that an ever-expanding trade deficit would wreak. That’s been largely in the background for a while as we dealt with the immediate crisis, but it hasn’t gone away and after a brief bit of improvement in 2008-09 the trade deficit has been climbing all over again for the past year. The world has relied on U.S. consumers as the engine of global growth for the past two decades, and one way or another that was never going to keep up forever. The only question was whether it it would adjust gradually — producing modest but long-lived pain — or adjust suddenly, producing all the pain at once. That’s still the question.