Back in August, Stan Collender said that for cynical electoral reasons Republicans were likely to oppose any action to improve the economy:

It’s not at all clear [] whether Bernanke realizes that the same political pressure that has brought fiscal policy to a standstill in Washington is very likely to be applied to the Fed if it decides to move forward. With Republican policymakers seeing economic hardship as the path to election glory this November, there is every reason to expect that the GOP will be equally as opposed to any actions taken by the Federal Reserve that would make the economy better.

On Monday, Matt Yglesias chimed in, suggesting that the White House needed to be prepared for “deliberate economic sabotage” from Republicans. On Friday, after taking note of recent Republican attacks on the Fed’s quantitative easing program, Paul Krugman agreed:

The core reason for the attack on the Fed is self-interest, pure and simple. China and Germany want America to stay uncompetitive; Republicans want the economy to 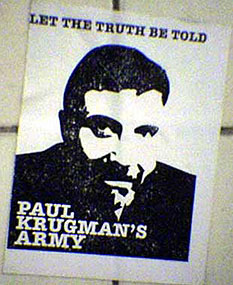 stay weak as long as there’s a Democrat in the White House.

Steve Benen collected these quotes today and added his concurrence: “We’re talking about a major political party,” he said, “possibly undermining the strength of the country — on purpose, in public, without apology or shame — for no other reason than to give themselves a campaign advantage in 2012.”

Strong statements! But here’s what’s really remarkable: virtually no one in any position of authority has picked up on this since Collender first suggested it. On the Republican side, practically everyone from the party leaders on down is thoroughly convinced that Barack Obama is one or more of: a socialist, an appeaser, a Chicago thug, a racist, a would-be killer of grandmas, and a president who wants to undermine everything that makes America great because he’s ashamed of his country. This is just standard rhetoric from Fox News pundits, radio show hosts, rank-and-file members of Congress, and party poobahs. It’s hardly even noteworthy anymore.

But the mirror image of that — Democrats saying that Republicans are deliberately sabotaging economic recovery — is virtually invisible. Krugman finally said it yesterday, but that’s it among high-profile liberal leaders. For the most part they’re just not willing to go there. This, in a nutshell, is the difference between the conservative noise machine and the liberal noise machine. One is noisy, the other is….restrained. We’ll see if that changes now that Krugman has brought his cannons to bear.

POSTSCRIPT: For what it’s worth, my own view isn’t that Republicans are consciously trying to sabotage the economy. Rather, I think it’s really easy to convince yourself of things that are in your own self-interest, and that’s mostly what they’ve done. A bad economy is in their self-interest, so they’ve convinced themselves that every possible policy to improve things is a bad idea.

Of course, excuses like that from mushballs like me are the reason the liberal noise machine is sort of anemic in the first place.