I don’t have a whole lot to say about tonight’s election results, but I will toss out a couple of quick thoughts:

Live by the model, die by the model. Lots of Democrats, including me, have been pointing out that structural factors alone predicted a 45-seat loss in the House this year. In other words, the bulk of the expected Democratic losses weren’t due to healthcare reform or Obama’s remoteness or liberal overreach or anything like that. It was baked into the cake all along.

But the model I wrote about, which comes from Douglas Hibbs, only predicted a 45-seat loss, and it looks like Dems are likely to lose at least 60 seats. That means Democrats underperformed the Hibbs model by 15 seats or so, which is a record for them. (See chart below.) They’ve underperformed by ten seats a couple of times in the postwar era, but never by more than that. So at the same time that it’s correct to blame most of their losses on structural factors, it’s also correct that this was something of a historically bad result. I think it might be fair to say that the economy is so epically bad that Hibbs’s model might not account for it entirely, but that’s mostly special pleading. It really does look like there’s a fair amount of scope to place a lot of the blame for tonight’s Democratic debacle on both tactical and policy missteps.

Live by the tea party, die by the tea party. The tea party movement may have provided a lot of Republican energy tonight, but it pretty obviously cost them a lot too. By my reckoning, Republicans most likely would have won Delaware, Nevada and maybe West Virginia if they’d run more mainstream candidates. (Colorado is still up in the air as I write this.) This is necessarily a little speculative, but it’s quite possible that non-tea candidates could have won all those states, and with it 51 seats in the Senate. So the tea party might have produced outsize gains in the House, but at the cost of control of the Senate. Sic transit etc. 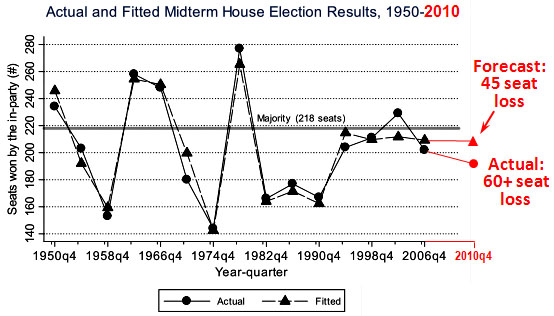