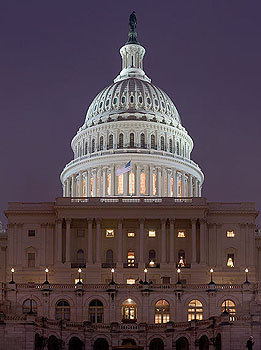 Should Democrats have negotiated an increase in the debt ceiling as part of Obama’s tax cut package? You’d think so, but apparently Harry Reid is actually eager to have a debt ceiling fight:

The theory goes something like this: Republicans will demand sharp spending cuts in return for lifting the debt ceiling. Let them. “Boehner et al have had the luxury of proposing all sorts of ideas that bear no relation to reality,” says Jim Manley, Reid’s spokesman. “Next year, they’ll have to lay it all out. No more magic asterisks, no more ‘we’ll get back to you.’ “

In this telling, the debt ceiling vote represents a trap for Republicans more than an opportunity for Democrats. If Republicans want to cut spending, now’s their chance. But that means passing a package of spending cuts, which they may find less enjoyable than simply saying that Democrats should stop spending so much. And if the American people aren’t supportive of the Republicans’ spending cuts, the GOP will be caught defending an unpopular package as part of a political gambit that could lead to the bankruptcy of the United State of America.

I don’t know how the debt ceiling fight is going to go, but the Reid/Manley theory seems all wet to me. Here’s the thing: Republicans almost certainly won’t demand sharp spending cuts. There might be some posturing along these lines, but nothing serious. Both mainstream conservatives and tea partiers alike have made it crystal clear that when push comes to shove, they don’t support actual substantial spending cuts.

But they do support modest spending cuts in areas that Democrats hold dear, and that’s more likely where the fight will be. It will be over a bit of healthcare funding, a bit of education funding, and a bit of food stamp funding. Republicans can pretty easily come up with $50-100 billion in spending that their base doesn’t care about and that doesn’t seem too draconian to the public at large, and that’s what they’ll fight over.

So we’ll see. My guess is that there will be lots of heat, very little light, and in the end both sides will agree to some modest cuts here and there and no more. The activist wing of the party might be itching to shut down the government, but I doubt that Boehner and McConnell are very eager to do that. They know perfectly well that, just as Bill Clinton was simply a more likeable figure than Newt Gingrich, Barack Obama is a more likeable figure than they are. He’ll win a fight over a government shutdown and they know it.