I’ve seen this before, but today Daniel Gros reiterates the point that Japan, far from being an economic basket case, has actually done pretty well given its aging population:

Policymaking is often dominated by simple “lessons learned” from economic history. But the lesson learned from the case of Japan is largely a myth. The basis for the scare story about Japan is that its GDP has grown over the last decade at an average annual rate of only 0.6% compared to 1.7 % for the US.

….But this picture of stagnation in many countries is misleading, because it leaves out an important factor, namely demography.

How should one compare growth records among a group of similar, developed countries? The best measure is not overall GDP growth, but the growth of income per head of the working-age population (not per capita). This last element is important because only the working-age population represents an economy’s productive potential….When one looks at GDP/WAP (defined as population aged 20-60), one gets a surprising result: Japan has actually done better than the US or most European countries over the last decade. The reason is simple: Japan’s overall growth rates have been quite low, but growth was achieved despite a rapidly shrinking working-age population.

I know this interpretation has its critics, but I’ve always found it pretty persuasive. As any corporate CEO can tell you, growth hides a multitude of sins. And while in theory it should be possible to gracefully transition to slow or flat growth, in reality it’s almost always very, very painful. All the little problems that you could ignore and all the encrusted 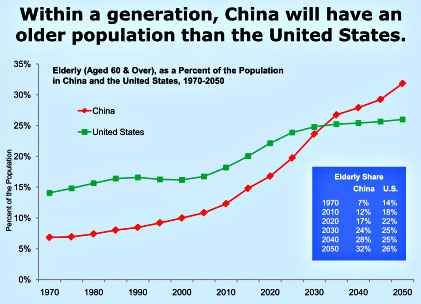 barnacles that you could shake off suddenly become enormous impediments that gum up the works and make it nearly impossible to maintain your existing infrastructure.

In any case, Gros says that Italy and Germany are headed in the same direction as Japan (Russia is already there), while France, the UK, and America are in relatively good shape. And although Gros doesn’t mention it, there’s another country in the rapidly aging camp too: China. By 2030 they’ll have a greater proportion of the elderly than the United States. This is one reason why I’m skeptical of alarmism about China’s imminent takeover of the world. I don’t doubt that China will continue to grow and flex its muscles, but in the long term they have a demographic time bomb to deal with that’s worse than ours, and they’ll have to tackle it as a considerably less wealthy country than us. It doesn’t mean they’re doomed, but it does mean that their path to world domination has a few roadblocks in its way.