I’m not really sure how separate they are. I think the specific fate of the very poor can become pretty unmoored from overall economic conditions, but certainly as a historical matter middle class incomes have risen the most at the same times America’s has had the most rapid economic growth—the 30 years after World War II and the late 1990s. You can construct some models in which this isn’t the case, but in practice the basic mechanisms for faster economic growth lead to rising middle class incomes, though not necessarily rising incomes for each individual middle class household.

This is a surprisingly hardy myth, and I’d like to help it die the grisly death it deserves. Here’s a chart showing real per capita GDP growth in the United States over the past century. I’ve helpfully added a straight red line for the period from 1950 to the present day: 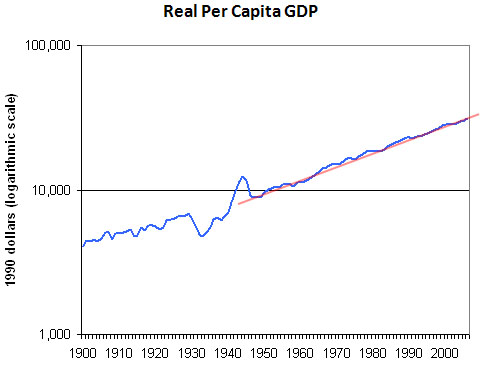 The past 30 years simply haven’t been a low-growth period. In fact, economic growth has been about the same as it was in the 30 years before that. Our problem isn’t growth, our problem is that the returns to growth have increasingly been skewed in favor of the very rich.

It’s certainly true that middle class wages tend to rise in extremely tight labor markets, like the one we had in the late 90s. Mickey Kaus is fond of making that point. But this is pretty meaningless unless you have a plan to keep labor markets perpetually tight. If you do, then believe me, I’ll be the first to sign up. But no one has such a plan. In the real world, we have to deal with the fact that real per capita growth is likely to be a pretty steady 2% per year over the long term and labor markets are going to fluctuate around a level that’s (hopefully) snug but not perpetually at 90s-era tightness.

The prosperity of the middle class obviously depends on a growing economy. But just as obviously, it depends on more than that. For liberalism to mean anything at all, we need to support policies that are aimed both at overall economic growth and at ensuring that prosperity is widely shared. We haven’t done a very good job of that over the past 30 years.