I was channel surfing last night when Inkblot jumped into my lap and trapped me on the couch. As a result I ended up watching most of Bill O’Reilly’s show,1 one segment of which was dedicated to Bill flipping out over the nerve of NBC’s David Gregory asking John Boehner to unequivocally denounce birtherism. To my surprise, Juan Williams disagreed (mildly) with O’Reilly, 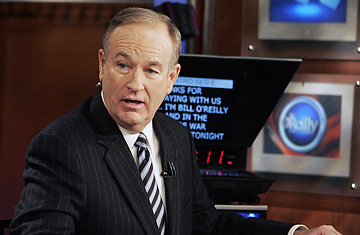 while Mary Katherine Ham, of course, egged him on. Only pinheads believe in the whole birther thing, Bill said. It was ridiculous to even bring up the subject.

I was reminded of O’Reilly this morning by the results of the latest PPP poll:

Birtherism is alive and well within the GOP ranks….Birthers make a majority among those voters who say they’re likely to participate in a Republican primary next year. 51% say they don’t think Barack Obama was born in the United States to just 28% who firmly believe that he was and 21% who are unsure.

And of course, that’s not all. There’s also this:

As state legislatures across the country begin their 2011 sessions, there is one lingering issue that simply won’t die. Conservative legislators in several states have already proposed more “birther bills” that allude to the conspiracy theory alleging that President Obama is foreign-born….In the last month, bills have appeared in Connecticut, Tennessee, Arizona, Indiana, Nebraska, Missouri and Montana that would all require anyone running for elected office to furnish a long-form birth certificate before being declared eligible as a candidate. Oklahoma, home to several attempts at pushing birther bills through the legislature, has no fewer than three birther bills currently under review….and still other states, including Texas, are carrying on discussions of birther bills from earlier legislative sessions.

To summarize: a majority of likely Republican voters think Barack Obama wasn’t born in the United States and upwards of a dozen state legislatures are considering birther-inspired bills. But Bill O’Reilly thinks this is just a nothingburger that the liberal press is blowing all out of proportion. I wonder how big it has to get before he thinks it’s legitimate news that the leaders of the Republican Party steadfastly refuse to denounce a lunatic theory that’s literally sweeping through their own party?

1I know, I shouldn’t blame this on poor Inkblot. But if it weren’t for him, I wouldn’t have watched.