Here in California, Gov. Jerry Brown wants the legislature to put a measure on the June ballot that would give residents an up-or-down vote on a tax increase to help balance the state budget. But that takes a two-thirds vote of both houses, so Brown needs a few Republicans to sign on. So far — surprise! — they haven’t.

George Skelton, longtime state political reporter for the LA Times, says Brown should give them a few more weeks to sign on. If they don’t, then he should unilaterally break his word to put it to a 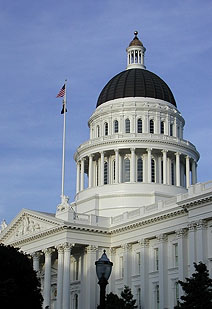 vote and simply sign the tax increase into law himself. But wait. Doesn’t that take a two-thirds vote of the legislature too? Yes it does. But Skelton thinks it might work anyway:

Why would Republican lawmakers vote for a tax bill to send the governor if they’re not even willing to let the public decide the issue? Here’s why, if they thought about it for half a second: It would force the Democrat into a tight spot where they could gleefully watch him squirm while breaking his solemn word.

And they could tell their anti-tax constituents: Look, voting for a special election on taxes is really the same as voting to raise them. The unions would spend enough to make sure they passed anyway. This way we save the $60 million cost of an election while squeezing some pro-business goodies out of Democrats.

I don’t really have any good reason for highlighting this, except to point out how California politics can drive even normally sane reporters into dementia. If you think this is crazy, that California Republicans would never agree to this, not even for the pleasure of watching Jerry Brown squirm, you’re right. California Republicans basically see our budget squeeze not as a problem, but as a once-in-a-lifetime opportunity to destroy as many programs that help out poor people as possible. It’s remotely possible that a few of them will vote for the ballot measure — democracy is good! — but exactly zero chance that any of them will vote flat out for a tax increase. They’d be flayed alive if they did and their political careers would be over.