Have you heard about the bus driver in Madison who made $160,000 last year? Since he’s now the poster child for public sector largesse in the state of Wisconsin, it’s hard not to have heard of him. So what’s up? Greg Sargent checked into this and found that the driver, John Nelson, actually earns about $50,000 in base pay. But:

Nelson was able to earn $160,000 in 2009 not because of his annual salary, but because he worked a huge amount of overtime hours. He was able to do this because of previous rules, negotiated by Teamsters local 695, that allowed 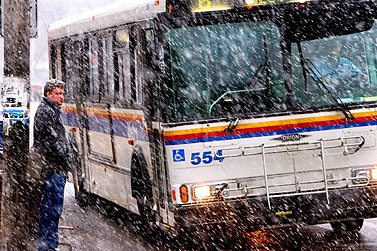 drivers with most seniority — and the highest salaries — to rack up large amounts of overtime.

….But wait, it gets better. It turns out that pointing to Nelson as an example of what’s wrong with public employee unions is thoroughly bogus in another way. According to Rusch, the city of Madison went to the bus drivers union last year and told them the rules allowing the highest-paid bus drivers to snap up the most overtime were a major problem for them. Turns out the union agreed, and renegotiated a deal to limit overtime in a way that has left Metro Transit happy. And guess what: That deal was negotiated through collective bargaining.

It’s possible that Nelson is just a guy who doesn’t have much of a social life and likes to work. And after all, if he didn’t work the overtime, someone else would. But there’s also this, from a report last year on the ongoing contract negotiations:

[City officials] declined comment on current contract negotiations, which are in binding arbitration. In May, Teamsters rank and file rejected a tentative agreement between the city and union leaders that would have changed rules that let senior drivers make tens of thousands in extra pay.

….The rules don’t always mean more net overtime costs but concentrate extra pay in fewer hands. The extra pay also lets those employees boost their state retirement income, which is based on an average of the three highest earning years.

Italics mine. The whole story, then, is a familiar one. Bus drivers in Madison aren’t, in general, living a cushy life. Starting drivers earn about $35,000 and Nelson, who’s been on the job for 36 years, earns about $50,000. There’s nothing outrageous about that.

But the rules are deliberately set up so that veteran drivers can goose their earnings for a few years at the exact time that their earnings are highest. It’s no surprise that the union rank-and-file initially voted down a proposal to reform this system, since the rank-and-file understand that eventually they’ll all have their own chance to goose their earnings just before retirement, thus providing them with a lavish pension. Only after arbitration and a lengthy public outcry did they finally accept changes to rein in this practice.

Not everyone takes advantage of the overtime rules to the extent Nelson has, but it’s nonetheless a widely used gambit to boost retirement earnings far beyond what’s fair. I don’t begrudge the bus drivers their pay or their benefits or their retirement plans, but I do begrudge them this time-honored scam for putting taxpayers on the hook for excessive pensions. Nelson isn’t a poster boy for overpaid bus drivers — that charge really is bogus — but he is a poster boy for this kind of pension abuse. It should stop.