Jon Chait reacts to the news that Muammar Qaddafi has called a cease-fire following the UN approval of a no-fly zone over Libya:

A few lessons pertain here. First, the neocon model of standing up to aggression, while frequently wrong, is not always wrong. The model holds that dictators are like bullies, and if you make clear you’ll stand up to them, they’ll back down. Obviously, this way of thinking fails a lot, most notably leading up to the Iraq war, when Saddam Hussein apparently remained in total denial about U.S. intentions to depose him. One of the main flaws with the idea is that dictators who are crazy enough to carry out mass bloodshed also tend to err on the risk-seeking side in other ways, too. 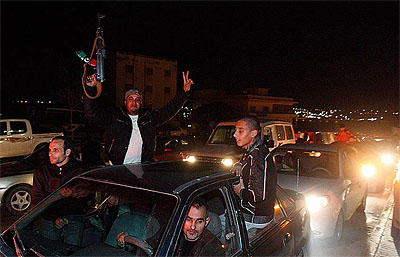 But some of them have a keen sense of self-preservation.

Opponents of intervening in Libya all seemed to assume that the threat of force would automatically mean employing force. This may not turn out to be a correct assumption.

Opponents also assumed that any use of force would devolve into an occupation and/or quagmire. They may be right, and their cautions deserve to be taken seriously. But one caution I have about the caution is how deeply it has been imprinted by the Iraq war. Ross Douthat’s recent column (“Iraq Then, Libya Now”) views Libya almost entirely through the Iraq prism, when Iraq is not the most relevant historical example.

Iraq, of course, has lessons. But the overwhelming tendency of our foreign policy debates is to over-learn the lessons of the most recent war. I confess to this myself, as my support for the Iraq war was strongly influenced by the successful interventions of the 1990s (the Iraq war, Bosnia, Kosovo.) In war, things usually go differently than we expect — often for the worse, but not always.

Points taken. It’s true that nearly everyone has a tendency to over-learn the lessons of the last war. That was one of the conclusions of Gideon Rose’s excellent How Wars End. However, it’s worth keeping in mind that his other conclusion is that political actors almost never think through post-war scenarios clearly enough.

In this case, that means wondering what happens after the cease-fire. Can Qaddafi simply leave a big chunk of his country in rebel hands? I don’t see how, and this means that one way or another this war has to either simmer along forever (unlikely) or else come to some kind of definitive end. I’d bet on the latter: This cease-fire isn’t going to last forever, and Qaddafi is highly unlikely to just give up. So what then?

We’ll see. I doubt that Qaddafi has simply folded his tent in the face of a UN resolution. More likely, he’s taking a breather to figure out how to continue prosecuting the war in a way that’s relatively safe from air power alone. If that’s the case, what’s Plan B?

POSTSCRIPT: I should just say that I’m not discounting entirely the possibility that Qaddafi really has decided to give up. He’s a weird dude, after all. It’s just that the fundamentals of the situation don’t make that very likely. One way or another, someone has to win this war, and it’s hard to see how the rebels do that, even with air cover, unless the army defects from Qaddafi’s control.

UPDATE: From the Guardian:

A disturbing call from Misrata was just broadcast on al-Jazeera which, assuming the caller was genuine, adds to the evidence that the Libyan regime is not abiding by its announced ceasefire. Mohamed Ali, who said he is at the medical centre, said there has been “indiscriminate shelling” which has wrought, “savagery and destruction on the whole city”.

This is, obviously, developing as we speak.