There are two numbers that go a long way toward explaining it. The first is 4.2. That’s the percentage of Americans with a four-year college degree who are unemployed….So while the overall economy continues to suffer through the worst labor market since the Great Depression, the elite centers of power have recovered. For those of us fortunate enough to have graduated from college—and to have 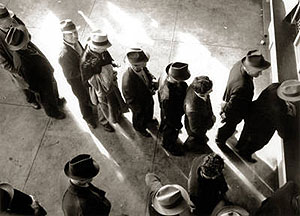 escaped foreclosure or an underwater mortgage—normalcy has returned.

The other number is 5.7 percent. That’s the unemployment rate for the Washington/Arlington/Alexandria metro area and just so happens to be lowest among large metropolitan areas in the entire country.

….What these two numbers add up to is a governing elite that is profoundly alienated from the lived experiences of the millions of Americans who are barely surviving the ravages of the Great Recession. As much as the pernicious influence of big money and the plutocrats’ pseudo-obsession with budget deficits, it is this social distance between decision-makers and citizens that explains the almost surreal detachment of the current Washington political conversation from the economic realities working-class, middle-class and poor people face.

I’m pretty sure I’ve made a similar argument from time to time, and I think there’s a lot to this. Hell, I’m an employed college grad who lives in an area with a relatively good economy, and I certainly don’t fool myself into thinking that I have the same sense of urgency about unemployment as someone in Los Angeles or Detroit.

But I think there’s another factor at work here: deep in their hearts, nobody in Washington really believes they can do anything about unemployment these days. Republicans don’t truly believe in their “growth agenda,” they just want to cut taxes and slash spending on social programs. Democrats would like to believe that fiscal stimulus works, but I suspect the reality is that most of them are pretty skeptical. Ditto for jobs programs, training programs, mortgage cramdown legislation, and much more.

What’s worse, even if you do believe these things work, it’s pretty plain that no one’s figured out a way to convince the public they work. Democrats barely even tried to persuade voters that the 2009 stimulus worked, and ended up getting completely hammered on the subject by Republicans. A few would occasionally mutter on camera that things would have been even worse without the stimulus, but that’s a pretty tough sell even if you say it with conviction, and very few said it that way.

In some sense, this is the ultimate triumph of conservatism: no one in Congress, and no one in the electorate, really believes any longer that Washington can do much about the economy. And even if you think otherwise, what’s the point of putting your career on the line over further stimulus if you know you won’t get any credit for economic improvement regardless of how it turns out?