Europe, it turns out, wasn’t really ready for the war in Libya they were so anxious to get into:

Less than a month into the Libyan conflict, NATO is running short of precision bombs, highlighting the limitations of Britain, France and other European countries in sustaining even a relatively small military action over an extended period of time, according to senior NATO and U.S. officials.

….Libya “has not been a very big war. If [the Europeans] would run out of these munitions this early in such a small operation, you have to wonder what kind of war they were planning on fighting,” said John 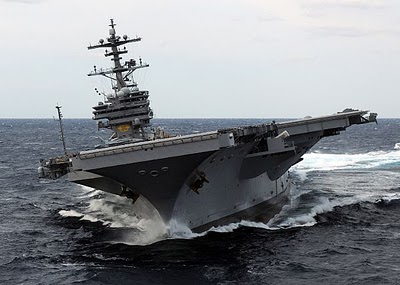 Pike, director of GlobalSecurity.org, a defense think tank. “Maybe they were just planning on using their air force for air shows.”

This kind of mockery is well deserved in one sense, but in another it just highlights the fundamental difference between the United States military and everyone else’s. The reason our defense budget is ten or twenty times the size of any other country’s isn’t literally because our army is ten or twenty times bigger. It’s because the American army is designed to project power. Most other national defense forces are designed to work only locally: either to defend against invasions or, at most, to be able to mount offensives across local borders. The only real exceptions are Britain and France, but even they have only a small ability to project power. Nobody else has much at all.

There’s a quantum leap between that kind of military and the kind that the United States has. You can’t get it by spending just a little more money; you have to spend a lot more money for a whole range of capabilities that local defense forces don’t need. That quantum leap is the real reason the U.S. military is so much staggeringly larger than anyone else’s.

So sure, maybe Britain and France should have more planes and more bombs. But really, there’s not a lot of point to arguing over nits like this. For them to project power effectively, even in nearby Libya, would require not just a bit of shoring up here and there, it would probably require a doubling or tripling of their defense budgets. Likewise, cutting the U.S. defense budget by bits and pieces wouldn’t really change our posture. If we want to project power all over the world, it’s going to continue costing us roughly what it costs us today. If we don’t want to, we could cut our defense budget by two-thirds in a stroke. There’s not a lot of room in between.

This is all Defense 101, but we seem to be learning it all over again in Libya. I keep wondering whether one of President Obama’s goals in this operation is to somehow rub everyone’s noses in this, and I suppose the answer is no. But it’s a useful reminder anyway.