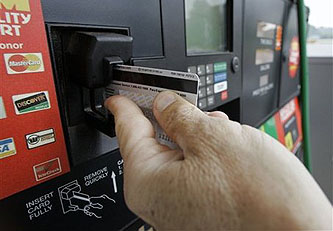 Zach Carter and Ryan Grim have a long but terrific piece in the Huffington Post today about the fight over debit card fees. It’s a case study in the lobbying industry and the not-so-secret priorities of Congress:

The swipe fee spat is generating huge business for K Street: A full 118 ex-government officials and aides are currently registered to lobby on behalf of banks in the fee fight, according to data compiled for this story by the Sunlight Foundation, a nonpartisan research group. Retailers have signed up at least 124 revolving-door lobbyists.

….“Oh man, this is unbelievable. You’ve got the banking community, the financial community, pitted against the retail community,” says Sen. Mike Johanns (R-Neb.). “They’ve both been in my office and I’m a clear yes vote on this … so you can only imagine those who are trying to figure this out or are still on the fence. They must be getting flooded.”

….“Every time we go in to an office and tell them we’re here to talk about interchange, they cringe,” says Dennis Lane, who makes regular lobbying trips to Washington and has owned a Massachusetts 7-Eleven for 37 years. “I think there’s been more lobbying — there’s been more hours and minutes spent on Capitol Hill discussing interchange reform — than there has been talking about a shutdown of the government.”

….While cable news was recently overwhelmed by coverage of budget negotiations and a possible government shutdown, many of the nation’s most powerful political players were focused instead on the Tester amendment — and on a lobbying scrum that even boggles the minds of seasoned politicians. “It’s the biggest issue in Washington right now,” says a senior Treasury official who’s grateful it doesn’t fall within his scope of responsibility.

This is such a classic case of how things work on Capitol Hill. The issue itself is (a) pretty much unknown to the average voter and (b) worth absolute mountains of money to a very small, very influential segment of American industry, namely big banks and big retailers. This makes it the perfect lobbying issue: banks and retailers are highly motivated to spend mind-boggling sums of money on this, while voters barely even know this fight is going on.

The whole piece is worth a read when you have a few free minutes. When you’re done (or maybe before you start), you should also read this short post from Adam Levitin that explains the actual technical issue with swipe fees aside from the fact that one group of millionaires is fighting a different group of millionaires over how to split up billions of dollars. It explains the policy piece of the story that Carter and Grim don’t.