Paul Ryan is “courageous” for proposing huge cuts to Medicare and Medicaid in order to finance tax cuts and balance the budget by 2050. But how about the Congressional Progressive Caucus? Their plan balances the budget sooner than Ryan’s, and their numbers are more honest to boot. So why haven’t they gotten any attention? Matt Steinglass thinks he knows:

The budget savings come from defence cuts, including immediately withdrawing from Afghanistan and Iraq, which saves $1.6 trillion over the CBO baseline from 2012-2021. The tax hikes include restoring 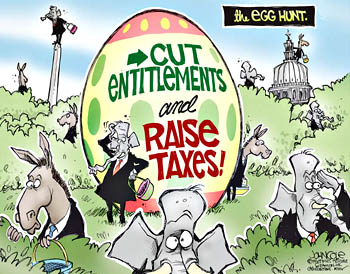 ….Mr Ryan has been fulsomely praised for his courage. The Progressive Caucus has not. I’m not really sure what “courage” is supposed to mean here, but this seems precisely backwards. For 30 years, certainly since Walter Mondale got creamed by Ronald Reagan, the most dangerous thing a politician can do has been to call for tax hikes. Politicians who call for higher taxes are punished, which is why they don’t do it. I’m curious to see what adjectives people would apply to the Progressive Congressional Caucus’s budget proposal. But it’s hard for me to imagine the media calling a proposal to raise taxes “courageous” and “honest”. And my sense is that the disparate treatment here is a structural bias rooted in class.

Bingo! The Beltway elite mostly understands things like Medicare and Medicaid as academic subjects. They themselves don’t really need them, so they can accept big cuts with considerable equanimity. But taxes are a different story. Higher tax rates affect them and their friends directly, so they’re wide open to intellectual just-so stories about how high taxes are economically destructive.

This same personal dynamic also leaves them wide open to believing that entitlement cuts are courageous while tax increases on the well-off aren’t. Ask a Wal-Mart clerk, though, and their life experience would probably push them in exactly the opposite direction. Neither one is inherently correct, but the difference is that Wal-Mart clerks don’t usually get op-eds printed in the Washington Post. Beltway elites do. So one meme takes off and the other doesn’t, even though both are equally rooted in little more than personal experience and class bias.