Let’s revisit the issue of pervs in hotel rooms. Why not, after all? It started with a New York Times op-ed by Jacob Tomsky, in which he told us that housekeepers are flashed or otherwise sexually accosted by male guests “more often than you’d think.” 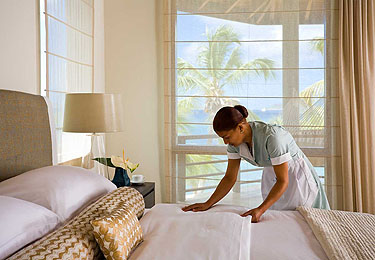 My off-the-cuff reaction was to suggest a zero-tolerance policy for this kind of thing: “Do it once and you’re thrown out and blacklisted forever. What’s the justification for extending even the slightest forbearance toward this kind of behavior?” Megan McArdle had an answer:

I travel a lot, and I’ve had housekeepers walk in on me in various states of undress, especially in hotels with turndown service….Not a big deal for me, but I’m sure it could happen to a male traveler perfectly innocently. So could a wardrobe malfunction — the robes in many hotels are not exactly overgenerous, especially for the burgeoning middle-aged physique of a chairborne warrior.

….Maybe there should be a blacklist for serial offenders, but again, I was a serial offender at a certain hotel in LA with early turndown hours — I assume they didn’t report me because, well, women don’t usually do that sort of thing.

That’s a fair point. Mistakes can happen. Still, I’ll bet I know exactly what Megan’s reaction was when this happened. It was, more or less, some version of “eek!” And I’ll bet the reaction of your average perv isn’t “eek!” And I’ll bet that your average housekeeper can tell the difference with about 99% accuracy. That’s why Megan never got a call from a hotel manager about this. Belle Waring puts it this way:

You, as a woman, know when you’re being flashed vs. when you accidentally walk in on someone who hasn’t heard your knock. Really. Big difference. A man showing you his penis on purpose has a certain way about him, let’s just say. Do I really have to go there?

In other words, if we’re willing to take housekeeper reports of perv activity seriously — and we should be — there’s a pretty slim chance of blacklisting an innocent man. Still, it’s true: mistakes can happen. And if you have made a mistake, this really isn’t the type you want to punish with instant banishment.

So how about this instead: Get reported once and you’re given a warning. My guess is that if you just forgot to deadbolt the door, you’ll never forget again after that. Do it again and you’re blacklisted for a couple of years. After all, everyone deserves a chance to turn over a new leaf. So let them back in after two years, but tell them that a third strike means they’re banned for good.

If this were the policy in a high-end New York hotel, it might not have much effect. You’d just make up a story about why, say, you’ll never stay at the Plaza again. But what about the big chains? Here, for example, is a partial list of Marriott brands:

As a former business traveler, I can tell you that you’d be in trouble if you got your ass kicked out of all of these. There are just too many cases where one of them is by far the most convenient to your destination, or worse, where one of them is literally the only hotel within 20 miles of your destination. Or it’s a convention hotel and everyone in your company is staying there. What’s more, there’s really no way to make up a plausible story about why you refuse to stay at any Marriott property anywhere in the country. So this would be a considerable motivation to stay on good behavior when you’re traveling.

So why don’t the big hotel chains have policies like this? It’s possible there are legal problems, but I imagine a private corporation has very wide latitude about whom it serves and whom it doesn’t as long as it has good evidence that it’s not discriminating based on age, race, ethnicity, etc. Beyond that there are practical problems: to effectively ban someone you need more than just a name. I’d be plenty annoyed if some skeev named Kevin Drum got banned by Marriott and I ended up having to prove I wasn’t him every time I made a reservation. But hotels routinely take credit card numbers and driver’s licenses, and those could be used to prevent ID mismatches. That’s not enough to make it impossible to evade a blacklist, but it would make it pretty difficult.

So….why not? Are there other good reasons that this would be unwise or unworkable? There might be. Seems worth thinking about, though. Big hotel chains are public companies that are susceptible to public pressure, and I’ll bet most of them already ban guests who trash rooms or otherwise cause them trouble. So they know how to do this. Why not do it to give their housekeepers a decent working environment too?