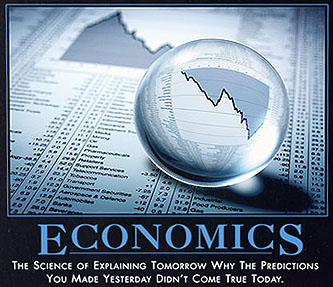 Ezra Klein highlights this interesting passage from Tim Harford about the problems that the Great Collapse exposed in the economics profession:

In terms of how economics needs to change in light of the crisis, where I would put my emphasis is not so much in behavioural economics, though I have no problem with it — it’s a very interesting area and it’s producing really important insights — but I think it’s more about engaging with the world, and the institutions of the world as it is. Economists got too used to reasoning in fairly abstract ways, without looking at the details of what was actually going on. If, as an economist, you’d looked at the way sub-prime loans were being sold, and the kinds of contracts that were being written and the financial instruments that were being created, you don’t need any mysterious appeal to psychology to explain the disaster. You just need to have been paying attention. That’s not to write off behavioural economics — but it’s just not true that behavioural economics was the single thing that was missing, that if only we’d had it, there would have been no crisis.

I think this is an interesting insight, but I’d make it more broadly. One of the interesting things about economics as a science is that its basic laws change all the time. This is quite unlike, say, physics, where the applications change but the basic laws of the universe don’t.1 But the laws of economics are just fundamentally different in a barter economy vs. a money economy vs. a banking economy vs. a fiat money economy vs. a credit economy etc. etc. Keynes’ great opus on unemployment literally couldn’t have been written a century or two before 1936 because unemployment wasn’t even a well-defined concept in the pre-industrial age.

So here’s my guess: in the past, we could at least take solace in the fact that the basic structure of the economy didn’t change very fast. But now it does. And the changes in the financial sector over the past few decades — which are part cause and part effect of the globalization and computerization of finance — have cumulatively produced enough quantitative change in the structure of the economy that it’s finally become a qualitative change, one that I’m not sure the economics profession has entirely grasped yet. Long story short, the laws that govern the economy of 2011 are fundamentally different than the laws of only 20 or 30 years ago. And Harford is right: understanding how the financial sector has changed, and how that’s changed the basic functioning of the economy, is really important. The question is whether modern economists are smart enough to figure out what the new laws are before the economy has changed on them yet again.

IMPORTANT DISCLAIMER: I am not an economist. I might be completely full of hooey about this. But then again, maybe not.

1New physical laws are discovered periodically, of course, but those laws have always been in operation. We just didn’t know it. Conversely, once you get beyond supply and demand, many of the laws of economics actually change as the nature of the economy changes.