Dana Milbank says Mitt Romney has an “Al Gore problem.” The problem, he says, is that Romney always seems phony. At his healthcare speech 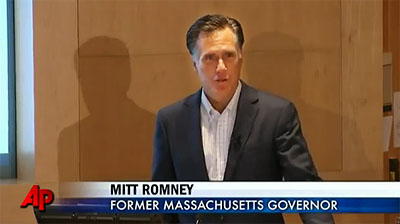 This is a perfect demonstration of an Al Gore problem, but I’d define the problem differently. An Al Gore problem is what happens when the media forms an impression of your character and decides to cram every irrelevant detail of your appearance and behavior into that frame, regardless of whether or not it means anything. Thus Romney’s hair and lack of tie are now evidence of a character flaw, as is his decision to give a detailed policy lecture in a university town without being officially sponsored by a University. An Al Gore problem results in the media ganging up on a candidate like cool kids mocking a geek, with literally everything he’s doing serving as more evidence for the predetermined narrative.

I’m glad that reporters are paying attention to the Al Gore problem. But I wish reporters would understand what the problem is — namely, a media pathology. After all, John McCain spent the years leading up to the 2008 campaign madly dissembling about and frantically reversing his record, but his mannerisms or appearance were never deemed to be a metaphor for a character flaw.

Mitt Romney is a panderer who’s shifted his positions repeatedly as the sweet spot for the Republican nomination has shifted. But that was never Al Gore’s problem. Gore’s problem was that, as politicians go, he was a perfectly decent but not especially sociable guy. So the press didn’t care for him much. But instead of simply reporting occasionally that he was a serious but not especially sociable guy, they turned on him like a pack of hyenas and insisted that every word out of his mouth, every stitch of clothing he wore, and every story told about him was part of a carefully calculated, meticulously constructed political persona. It was a feeding frenzy. See Bob Somerby for several million more words on this.

However, although Chait is right about this, I’m not happy about having to acknowledge something non-negative about Romney. Or even about the media’s coverage of Romney. So let’s make up for that. I wrote last night about Romney’s bottomless desire to say and do anything to get himself elected president, and this morning I got this from a friend who grew up in Romney’s hometown:

When people speak of Romney really, really wanting to be president, they probably don’t know just how true that is. Over the years, and more recently, I’ve spoken to some of the Romneys’ close family friends who served with him in the Belmont church. And they all say the same thing: Mitt Romney has always wanted to be president. Always. I mean, we’re talking about statements like, “As long as we’ve known him, it’s been clear that Mitt wanted to be president.” And they’re talking about 30 years ago or more.

So there you have it. Nothing to do with his clothes or his hair or his dog. Just the candid recollections of friends who have known Romney for a long time. And who knows? Maybe there’s nothing wrong with wanting to be president since your 20s and relentlessly working toward that goal. Romney would hardly be the first. Still, that’s who he is. A guy who wants to be president desperately and, by all accounts, will pretty much take whatever position is most likely to get him there at any given moment.

Even from a broader perspective, this is Romney’s biggest problem: he’s merely ambitious, not insane. If he gets the nomination and loses, he’ll simply be dismissed by the faithful as a RINO and nothing will change. What the Republican Party really needs right now is a Goldwater moment. They need to nominate a true believer and then get their asses handed to them in a landslide that leaves no doubt about what direction they need to go if they ever want to inhabit the Oval Office again. Romney wouldn’t get them there. For the long-term health of the party, Michele Bachmann is probably their best choice to run against Obama next year.

UPDATE: Brendan Nyhan was on the “Romney as Gore” beat a couple of months ago.