Back in 1985, a group of researchers decided to test the “hot hands” theory of basketball playing. That is, do players sometimes get hot, making shot after shot because they’re hot, or do players have hot streaks just because statistically you’re going to make a 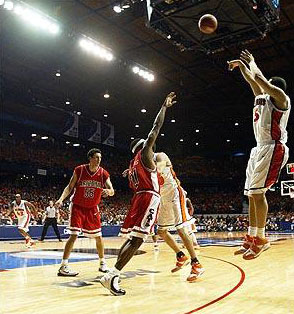 bunch of shots in a row sometimes? Their conclusion was clear: there’s no such thing as hot hands. But athletes themselves, even really smart, analytical ones, have never been able to accept this. They know the feeling of being hot, and no pointy-eared academics can tell them otherwise. I once had a (really smart) boss who felt that way, for example, and Paul Waldman agrees:

Ball players know that feeling — the days when every time you go up for a shot, even before it leaves your hand you just know it’s in the bucket….But if those good and bad days happen infrequently enough, from a statistical point of view, they look exactly like random noise. If you flip a coin a thousand times there will be runs where you’ll get 10 tails in a row, and if you play a hundred games there will be some where you’ll hit 10 shots in a row. They may look the same statistically, but that’s only because the magical games are infrequent. But that doesn’t mean that the player isn’t playing differently during that game, in ways that are so subtle they’re probably impossible to detect.

Hoo boy. First off, once every eight or ten games isn’t infrequent at all. In fact, it’s really, really frequent. And second, unless we’re invoking some kind of quantum mechanical effect on our neurons, nothing in basketball is too subtle to detect. There’s nothing that’s even close to being too subtle to detect.

I’m not really picking on Paul here. (OK, maybe I am a little.) I just think it’s interesting how unwilling most athletes are to accept the results of this study. The feeling of streakiness is so strong that we feel it just has to be true. In reality, though, most streakiness is just a combination of chance and chance. Chance #1 is the raw probability of hitting a bunch of shots in a row every once in a while. Chance #2 is what our opponents are doing. If, by chance, they make a bunch of bad plays, or happen to be guarding you badly, your shots are going to feel good. You’ll have slightly better positions, slightly longer looks, and you’ll make more shots. Adrenaline will do the rest.

But why did I say “most streakiness” can be explained this way? Why not “all streakiness”? Because there’s always Joe DiMaggio. That 56-game hitting streak of his really was out of this world. Statistics can’t explain that.

BY THE WAY: It’s possible, of course, that the hot hands study has some methodological defect. I wouldn’t bet on it since Amos Tversky was one of the co-authors, but you never know. On the other hand, it’s also worth noting that they did four separate tests of streakiness and then added both a study of free-throw shooting and a controlled experiment with the Cornell basketball team. Result: nothing, nothing, nothing, nothing, nothing, and nothing. There’s just no there there.

AND THIS: I believe the hot hands study is correct. Really. And yet….even I have to admit that it’s hard to accept that players don’t have good and bad games quite aside from their statistical chance of randomly doing well once in a while. It’s just….hard.