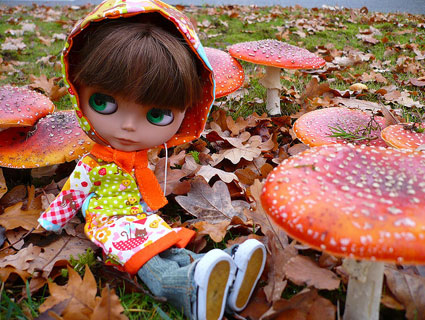 Last week Andrew Sullivan linked to my post about new research into the mystical effects of psilocybin (aka the active ingredient in magic mushrooms) and said that his own experience with mushrooms a few years ago had deepened his faith and brought him closer to God. A reader objects:

This is why rationality is ultimately irreconcilable with faith. Scientists can now pinpoint the exact spots in your brain that light up during spiritual moments and you have found a mushroom that reproduces the effect. But instead of acknowledging this as an interesting yet completely natural sensation, you instead conclude that it’s a mushroom-shaped window into the divine.

Your mind is playing tricks on you, much in the same way that your eyes play tricks on you when items move into your blind spot. However, the effect sounds interesting; I might have to try it.

Andrew has an answer (“by definition, any divine manifestation in the mortal world will have some physical manifestation”), but it doesn’t seem very convincing to me. Like his reader, I figure that if the feeling of the divine can be reliably activated by ingestion of a particular drug or stimulation of a particular nerve, then it’s not really likely to be anything very divine after all. But then, I’m an atheist. I would think that, wouldn’t I?

And with that, I’ll now abuse the art of the segue to relate this to something that seems totally different. Here’s my question to you: What do you think of those reality TV shows like The Bachelor and The Bachelorette, where some handsome guy or gal sweeps through a field of equally handsome contenders week by week until they’re left at the end with their one true love? As near as I can tell, most people who watch these shows think that it shows something about the power of romance. But I have a different takeaway: if you can take 25 random people and reliably make your bachelor/bachelorette fall in love with one of them every single time, then it really means there’s not much to romance at all, doesn’t it? A few weeks of time and a modest selection of potential mates will do it every time. Sorta sucks all the mystery out of it.

And yet, these shows remain popular, even though they demonstrate on a weekly basis just how mechanical and predictable love is. Why are so many people enamored of having their faces shoved into this week after week? Beats me. But I guess the answer is the same as it is for psilocybin and the divine: if you believe in love as a transcendent experience in the first place, these shows just confirm that belief. If you don’t, they confirm just the opposite. Aren’t we human beings wonderful?

UPDATE: Andy Sabl is less enthusiastic about psilocybin than I am, but he’s thinking along the same lines as me after reading various reactions to psilocybin’s mystical effects:

In other words, religion in, religion out. Give mushrooms to a bunch of hippies and they’ll gain a new appreciation for yoga; give them to a heterodox Catholic and he’ll ponder the Incarnation. Give them to me and I might start to (wrongly) believe that I can understand complex mathematical proofs or conceive (wrongly) that I remember my once-adequate ancient Greek — which once gave me the very fulfilling experience of being able to read easy bits of Plato without a dictionary.

I’d make a distinction here. I agree with Andy that I’m not much interested in an “enlightenment” that doesn’t also happen to be true. However, the evidence on psilocybin suggests that it not only provides a mystical experience that might be intrinsically interesting (regardless of how you view it), but that it also has longlasting effects on purely measurable qualities like happiness and satisfaction with social interactions. That seems pretty worthwhile to me if there are no harmful side effects. I may not want to believe things that aren’t true, but I’m perfectly willing to artificially improve my emotional state. Happier is happier, after all.