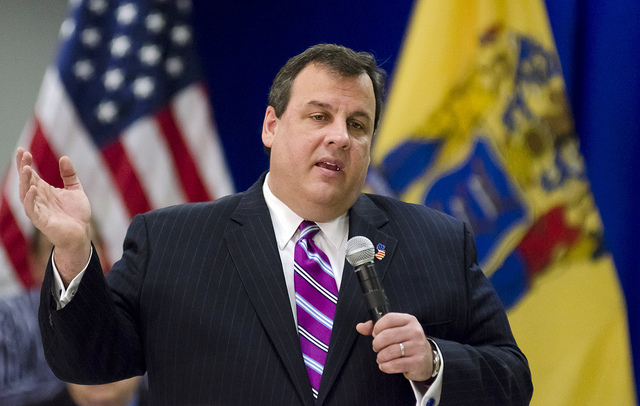 The New Jersey legislature on Thursday joined Wisconsin, Ohio, and a handful of other states by drastically scaling back pension and health-care benefits for government workers and curbing collective bargaining rights for public-sector unions. All told, 750,000 public-sector workers will end up forking over thousands of dollars more each year to fund their pension and health-care benefits—in part to plug a $52 billion hole in New Jersey’s state pension fund.

But there’s a key distinction between New Jersey and the other states that passed similar bills: Democrats control the legislature.

Unlike Wisconsin and Ohio, where newly elected Republican majorities in the legislature and new Republican governors rammed through unpopular bills curbing bargaining and benefits, in New Jersey, Democrats gave a Republican governor, Chris Christie, the votes he needed. The state Senate passed the bill 24 to 15, with 8 Democrats bolting from their party to support Christie. In the Assembly, the vote was 46 to 32 in favor of the measure, and 14 Democrats sided with Republicans.

So what happened? After all, this is New Jersey we’re talking about, where public-sector unions are traditionally a pillar of support for Dems in fundraising, get-out-the-vote, and at the ballot box. According to the New York Times, Christie was able to cobble together support for his bill, which he called a model for other state legislatures, by taking advantage of the Garden State’s old-school, city-centric political system:

In his campaign to rein in the unions and shrink government, Mr. Christie has often been helped by New Jersey’s unique political culture, where local political machines still dominate some areas, and many state legislators also hold local government jobs. That gives striking influence in Trenton to mayors, county executives, and local party bosses who struggle with rising labor costs and have repeatedly sided with the governor’s push to cut benefits and wages.

There’s another intriguing narrative here—namely, how the state Democratic Party functions effectively after a handful of its members backed a bill hugely unpopular with the Democratic base. What we’ll likely see, per the Newark Star-Ledger, is a growing schism among New Jersey Democrats:

Today’s union protest, like other recent demonstrations, did nothing to stop the bill. But it did highlight the growing fissures in the state Democratic Party. While Sweeney and Oliver were pushing the bill, the chairman of the state party, Assemblyman John Wisniewski (D-Middlesex), was rallying protesters with two-dozen other Democrats. “I represent the Democratic wing of the Democratic Party,” he said. Bob Master, a leader in the Communications Workers of America, said Democrats should not be “collaborating” with Christie.

Opponents of Christie’s bill have a nickname for those Democratic “collaborators”: Christie Democrats. That will be a damning label to hang around a Democrat’s neck when re-election rolls around.