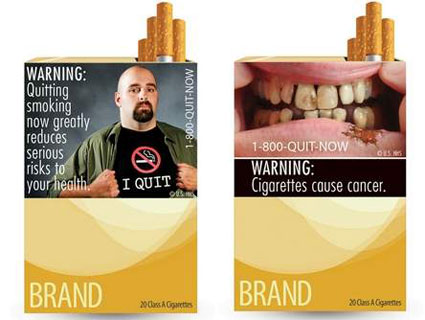 Among the images to appear on cigarette packs are rotting and diseased teeth and gums and a man with a tracheotomy smoking.

Also included among the labels are: the corpse of a smoker, diseased lungs, and a mother holding her baby with smoke swirling around them. They include phrases like “Smoking can kill you” and “Cigarettes cause cancer” and feature graphic images to convey the dangers of tobacco, which is responsible for about 443,000 deaths in the U.S. a year.

Cigarette makers have until the fall of 2012 to introduce the new labels (I’m going to go ahead and bet you won’t see them until right around then), which must cover the top half of every pack of cigarettes.

Now, if you’re a smoker, I can see how this might bother you. You probably feel like you know the health risks of smoking, and you’ve made an informed decision. (In fact, that’s the exact same argument the tobacco companies made for years in court as they successfully smacked down one cancer lawsuit after another.) Why should the FDA ruin your day by putting disgusting photos and disturbing warnings on your cigarette pack?

But here’s the thing: it’s not just you who is paying for the health consequences of your decision. If you live past 65, the taxpayers are footing the bill, just like we would for anyone else. So if the government isn’t going to make a habit that is a massive public health risk illegal (and I think the drug war shows why that might be a bad idea), the least it can do is strongly discourage the habit. (The FDA is actually behind many first-world public health agencies in mandating really explicit anti-smoking labels on cigarette packs.)

I recently finished Siddhartha Mukherjee’s The Emperor of All Maladies, an awesome “biography” of cancer that everyone should read. I was especially struck by the contrast between Mukherjee’s willingness to, if not forgive, at least understand the horrible mistakes that were made in early cancer treatment (e.g., radical mastectomies for everyone!) and his barely suppressed rage at the “range and depth of devastation” caused by cigarette smoking:

It remains an astonishing, disturbing fact that in America—a nation where nearly every new drug is subjected to rigorous scrutiny as a potential carcinogen, and even the bare hint of a substance’s link to cancer ignites a firestorm of public hysteria and media anxiety-one of the most potent and common carcinogens known to humans can be freely bought and sold at every corner store for a few dollars.